‘Hold my hands up, deteriorate rapidly’ the original Lennon quote that backfired 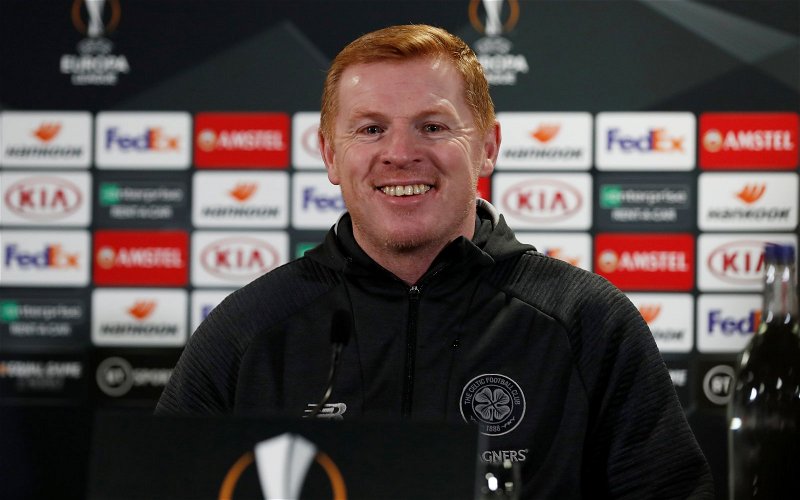 There was one question at yesterday’s media conference where Neil Lennon looked especially uncomfortable.

After discussing banners and supporter unrest there were a few questions touching on tonight’s match and general issues around the club followed by a request from Sky Sports for some thoughts on the abandoned Paris St Germain match against Basaksehir.

The came the question from The Cynic podcast where someone had done their homework with a comment that unsettled Lennon.

Before facing Lille at the end of October Celtic had failed to win in their three previous matches, November and December have been very unforgiving with that three match run now stretching to just two wins in 12 matches.

On October 27, two days after the draw at Aberdeen and ahead of the Europa League tie away to Lille BBC Scotland reported Lennon saying:

We’ve lost one game in the league and pundits are talking about me being two games away from the sack. Players getting singled out, abused, criticised, it’s absolutely shocking.

It’s media-driven, there’s no question. I have seen two newspapers run polls on whether I should get sacked or not. I have never seen it before in 20 years I have been here.

There’s no justification for me to be sacked. None whatsoever. If things start to deteriorate rapidly, I’ll hold my hands up and say, ‘this isn’t working, we need to look at something else’. But at the moment we’re nowhere near that.

Now, the criticism isn’t media led, some aspects of the protests at Celtic Park have been undesirable but it isn’t difficult to find concerned supporters. At the time of those comments probably most Celtic fans had trust in Lennon turning things around, today that certainly isn’t the case.

QUESTION? On 27th of October you said if things start to deteriorate rapidly you would hold your hands up and say that this isn’t working. Can you hand on heart say that things haven’t deteriorated with two wins in 12 games and what can you do that you haven’t already done in this run of results to make sure that it doesn’t become 13 tomorrow night?

Neil Lennon: Em, good question. Look as of tomorrow night we are going to use the squad. I look at aspects of our play, Milan for example, for a long period in the game we were very, very good, we just let ourselves down with individual lapses. I think that it is confidence more than anything else with the players. They went into the game again at the weekend and there is a bit of anxiety there in their play in the final third.

Once they get a feel for the game and start flowing I think that we will be absolutely fine and start reigning things back in. It’s not been a quick fix, I just think that they have to work themselves and we have to work them through it. And come up with solutions, particularly in the final third where we have so much of the ball.

I didn’t think that we crossed the ball quickly enough or early enough or enough in the first half against St Johnstone at the weekend so that’s something that we need to improve on. And obviously take our chances when they come, we had good chances- Odsonne, Rogic with the header. And just when you are going through a run like that it may take a set-play, it may take a deflection, it may take an own goal even just to get our noses in front and it will settle everyone down.