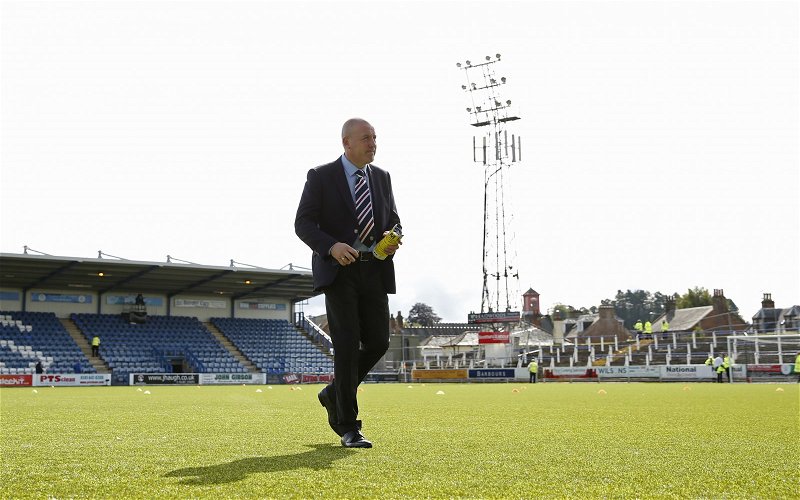 Queen of the South are under more fire after a second attempt to justify George Galloway and family members to attend Saturday’s match with Dundee.

The decision has turned into a PR disaster for the club as hundreds of fans look on from the outside after the club rolled out the red carpet for the veteran opportunist who has previously declared his love for Dundee United, Celtic and Manchester United.

Queen’s were ready to welcome a limited number of fans back into Palmerston on Saturday but as everyone in the country knows the whole of Scotland was placed into Tier 4 at midnight on Friday- closing the door on the fans who had hoped to attend the match against Dundee.

It seems that Galloway broke the law last week to leave his London home for the Dumfries and Galloway region with his new favourite club happy to accommodate him on Saturday while lifelong fans fell victim of the protocols.

Earlier this month the Scottish Government released grants for lower division clubs in the SPFL, so far at 10.20am on Monday there has been no comment from the SFA or SPFL about a member club allowing a so-called fan to break with the rules that have left genuine fans on the outside, unable to watch their clubs over the last nine months.

The Board would like to issue a fuller apology to supporters. > https://t.co/dn6cAdlX5O pic.twitter.com/YwhYDoewQn

Keep digging a hole Queens. So one rule for Mr Galloway and his family, and another for those who entered the ballot for tickets (never mind it being against current restrictions which you openly accept)

I like how after two statements there is still no acknowledgement of it being illegal to have ‘fans’ at a game in Level 4 or why even in Level 1 a failed politician was prioritised over loyal fans.

What a mess! There’s only a couple of you could have sanctioned this. Somebody must know!!! Time the board moved on and new leadership was found. Embarrassing decision making during a difficult time for both team and fans on and off the park. Resignations statement next up !

Someone in the club decided that this should happen while season ticket holders and other supporters were excluded. This man had already boasted of his shameful flouting of guidelines when crossing into our region and yet the club make exceptions for him.

Hope whoever authorised his entry has stepped down/got the sack after this. Absolutely shameful so much damage this has caused the club not only breaking the rules but saying a big up yours to all your loyal fans who have backed you during this difficult time

The bigger issue to me is that the club are knowingly facilitating a political manoeuvre by a known opportunist.

His appearance in the region, and sudden interest in the club, isn’t by chance.

This goes beyond simply sticking 2 fingers up to the genuine fans.

Did you just forget that the whole of mainland Scotland was in tier 4 from Boxing Day. Hadn’t been all ovet the media and the talk of the town or anything ?.

Makes me sick hearing about folk sucking up to George Galloway. Time for the board to resign? Both for allowing Galloway and his group into the stadium and then for the poor way it has been handled.

Until someone, the person who authorized Galloways attendance, is publicly sacked then this matter cannot and should not be closed.

You cancelled the fans after a T1>T4 change so he should have been cancelled also… no excuses I’m afraid.

Absolute disgrace Queens laughing stock of Scottish football thanks for making us proud Doonhamers ?.
Someone needs to take responsibility for this decision.

I am pledging that I will sponsor your team.
Can I get 5 tickets for my family at your next home game?
I need to travel from Lanarkshire but intend to tell @policescotland that I am going to break the law.
I will also post pictures on social media as part of a publicity stunt

It appears season ticket holders have been totally disregarded. It also appears to me ( call me cynical if you like) that that was a political decision made by either the club or someone at the club.

We would like to apologise to our supporters who have been upset by the attendance of George Galloway at our game v Dundee. > https://t.co/UBTyeyZYbx pic.twitter.com/KbZlxpwyxv