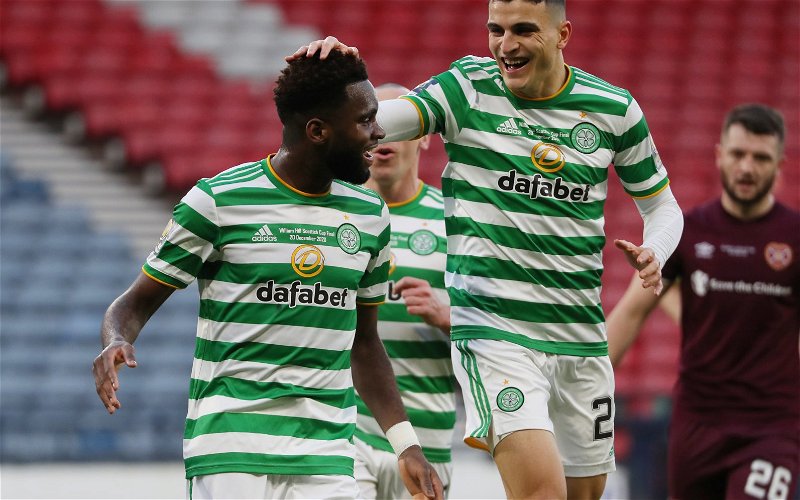 Chris Sutton has claimed that Odsonne Edouard’s career is falling off a cliff.

In the first two months of the year the Frenchman was flying, scoring for fun alongside Leigh Griffiths as Celtic swatted aside domestic opponents to clinch a ninth successive title and reach the semi-finals of the Scottish Cup.

Although Celtic disappointingly went out of the Europa League to Copenhagen Edouard did score home and away after impressing in the group phase when Celtic finished ahead of Lazio and Rennes.

This season for whatever reason it just hasn’t happened. There has been the odd spark and flash- goals away to Sparta Prague and A Milan- that dinked penalty at Hampden last week but the ruthless striker that Scottish defences feared in previous seasons has been missing since the season kicked off in August.

Sutton is a huge fan of French Eddie but with a critical week coming up for Celtic the former hoops striker admits that there is something AWOL about the former Paris Saint Germain forward:

This boy is falling off a cliff. He’s nothing like the striker who has lit up the Scottish game for the past two previous years. It’s hard to actually fathom what is going on with him because he is miles off the pace.

Again, just like Griffiths, I’ve had my say on this situation. I don’t know if it is because he feels as though he should have had a move by now, or if it’s because the lack of atmosphere in the empty stadiums is affecting him, or if it’s something else.

Whatever it is, he just looks to me as if he’s sloping around looking as though he’s feeling sorry for himself. The dinked penalty in the Scottish Cup Final said everything about the class we’ve all seen he possesses.

But the causal missed chances hit straight at Craig Gordon during the Hampden game, the running up blind alleys and poor touch against County and more missed opportunities said more to me about where he’s at right now.

At one stage, I thought Edouard’s move from Celtic was going to be to one of the major European clubs. Now I’m just not so sure. He hasn’t delivered when his team or his manager have really needed him to this season.

He’s had injuries, he had a spell out through the virus. Fair enough. But there hasn’t been enough. Full stop. Quite frankly, Neil has been trying to produce results without his two biggest weapons constantly firing.

The two ‘weapons’ Edouard and Leigh Griffiths were paired together against Ross County in midweek and look like facing Hamilton today. A return to their form of January and February is badly needed if Celtic’s season is to stay on track.