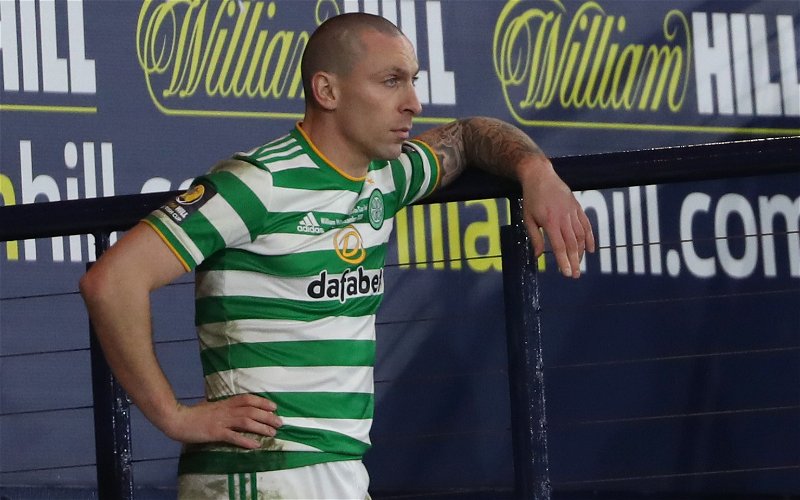 Martin O’Neill has hit out at the ‘basement dweller’ pundits that have been writing Scott Brown off.

Today the midfielder captained Celtic to their twelfth successive domestic trophy against another background of people writing him off.

Brown had sat out Celtic’s last two matches but replaced Ismaila Soro before making way after 105 minutes- shortly after playing a lead role in Celtic’s third goal which was netted by Leigh Griffiths.

O’Neill has rarely had a supportive word to say about the media or pundits but rarely says no when invited to share his opinions.

The former Celtic boss is rarely predictable, delivering a strong defence of Brown while putting the boot into some of his long distance critics.

Picking up on O’Neill’s comments on BBC1, the Daily Record reports him saying:

He’s been written off a number of times and bounced back. When he was 29 years of age he came back and won a Treble Treble. He’s had a great career and he makes a pointed remark there about ex professionals: I must admit that’s something that does really gall me in the game. Normal pundits, absolutely, but ex-professionals having a go?

Especially sometimes – and I’m not talking about here, I’m talking about in other parts of the United Kingdom – you have players who have done absolutely nothing in their career, nothing at all, who have been basement dwellers as footballers and ended up on a screen criticising something in front of them that they’ve never experienced either as a player or a manager.

And they’re giving an opinion – their opinion is worthless. I’m not saying that every opinion up here from an ex-pro is worthless, far from it, but sometimes you have to disregard these things. And I’m trying to get into my head the whole idea.

Brown was involved in a running battle throughout today’s match with Hearts veteran Steven Naismith who was given a second half yellow card for sending the Celtic skipper to the deck as they waited for a corner.

Tonight Brown became the first man to captain his side to four successive Scottish Cup wins.