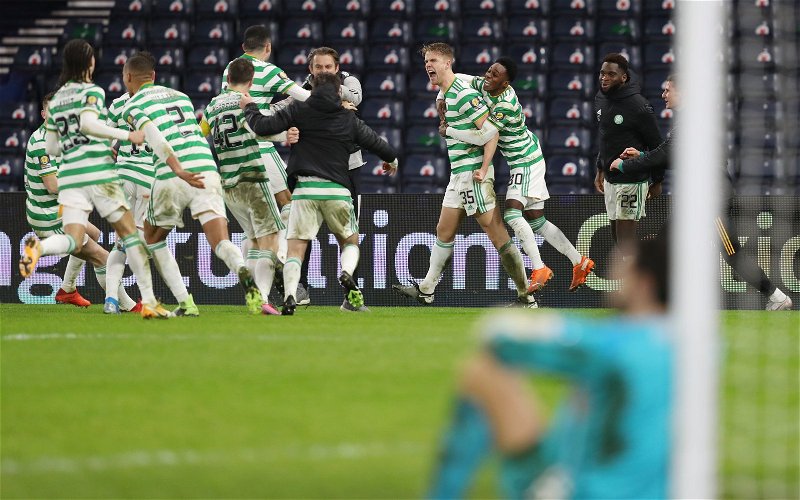 There were no fans inside Hampden to witness it but the TV cameras allowed Celtic fans worldwide to savour the joy and relief of the 2020 Scottish Cup Final.

It was a nerve shredding afternoon for the Hoops supporters as they watched in disbelief as the lead was twice thrown away with the trademark defending that has dogged the season to date.

“This has just been the most dramatic, the most incredible of Scottish Cup finals!” ?

Celtic win the Scottish Cup for the 40th time and complete the quadruple treble! ?? pic.twitter.com/Xv8we6pO9e

Ryan Christie and Odsonne Edouard scored in the first half but horrendous defending allowed Hearts back into the match and force extra time.

Leigh Griffiths put Celtic back in front at the end of the first half of stoppage time but it was no surprise when Hearts again equalised to force the match into a penalty shoot-out.

When Ryan Christie missed Celtic’s third penalty the trophy was within Hearts’ grasp but two saves from Conor Hazard allowed Kris Ajer to step up and seal the match when he rattled his shot past the despairing Craig Gordon.