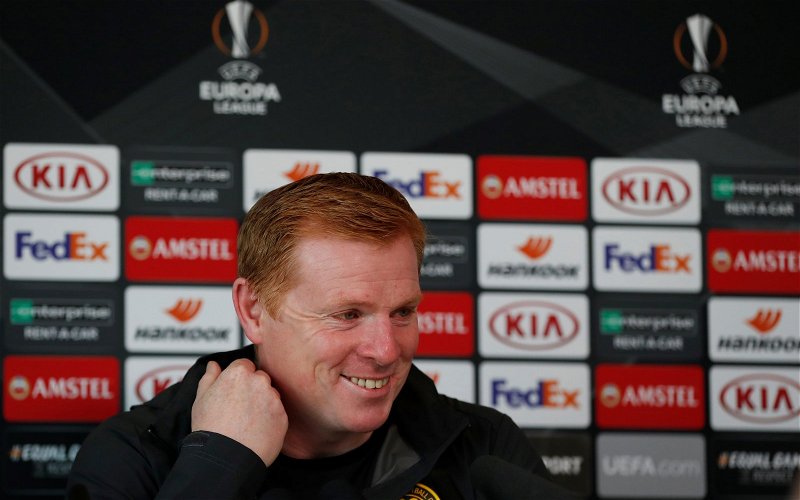 Neil Lennon turned on Celtic TV match commentator during the only point of dispute during today’s media conference.

There was nothing like the fiery levels of the recent pre-Livingston media conference that failed to make its way onto Celtic’s You Tube channel.

Peter Lawwell’s departure was the main talking point with Lennon and the reporters falling over themselves to praise the outgoing CEO.

The friendly tone lasted most of the conference until Martin started to look for comments on how the Lawwell-Lennon relationship had endured through the toughest of times.

Martin has recently taken up commentary duties for Celtic TV but was invited in on the Zoom conference to provide content for his online PLZ Soccer site.

Peter Martin: Just one final point Neil, how much does it mean to you in his last period in charge that Peter, who’s clearly the man who has stuck by you when times were tough, you were up against it?

Neil Lennon: What do you mean stick by me?

Peter Martin: Well people are clamouring for, as you mentioned there seemed to be a bloodlust for your sacking

Neil Lennon: Yeah, by you guys. You guys keep promoting it, keep talking about it, keep asking questions. I keep answering the same questions over and over again. He’s been very strong with me Peter and I’ve been strong with him. It’s not like an old pals act or anything like that. We feel that, the season hasn’t gone the way that we wanted it to, in previous seasons it has but sometimes that’s football.

“It’s not all down to individuals, its about the collective and Peter shouldn’t bear the brunt of this season on his own, it’s a collective responsibility and we still have a lot to play for between now and the end of the season.”

When Tony Mowbray was sent on Gardening Leave in 2010 Lennon came in as Caretaker, after attending a few ‘fan roadshows’ in the early part of the summer Lawwell made him permanent manager, a post he held for four years before resigning.

A similar scenario was played out in the first half of 2019 after Brendan Rodgers left Celtic for Leicester, initially Lennon came in as caretaker before being appointed on a permanent basis after the Scottish Cup Final win over Hearts.

? ‘When you put that into perspective it’s phenomenal the work he’s put into the club’ #CelticFC boss Neil Lennon insists Dominic McKay ‘has big shoes to fill’ in succeeding Peter Lawwell

? ‘I’m sad to see him go but 17 years is a huge amount of time for a job as pressured as that’

Thanks to @PhilipsGrant for the opportunity to return to commentary with Sunset and vine. Thoroughly enjoyed being back on the mic doing something I love. ? pic.twitter.com/8PlwClDJCQ