Fatigue, jaded, off it- Michael Stewart’s warning over key Celt 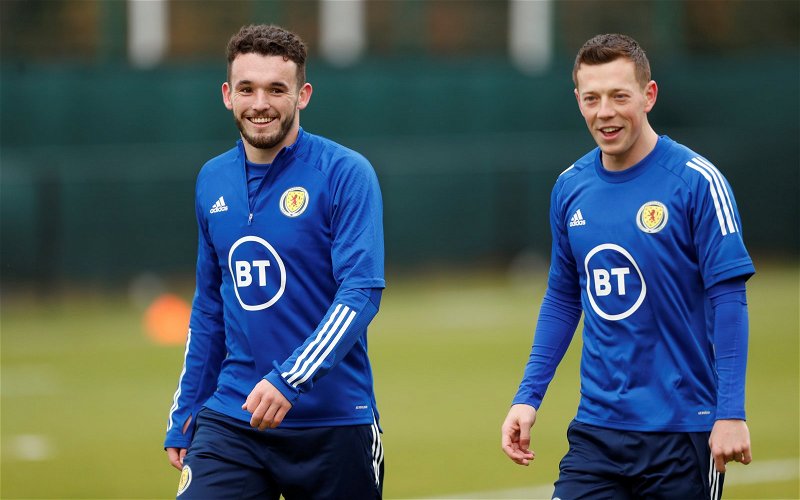 Michael Stewart believes that Callum McGregor’s levels have dropped off over the last 18 months.

While the midfielder retains a high level of consistency in a struggling Celtic side it does seem as if he is carrying too much of the burden as the quality in the team is diluted.

Over the last six months McGregor has basically been without Kieran Tierney and James Forrest with Scott Brown a diminishing force in the Celtic side.

With the hey-day of Scott Sinclair, Moussa Dembele and Stuart Armstrong now confined to the history books McGregor hasn’t sparkled as he once did although no one would advocate a Celtic team without the 27-year-old.

He is also a key figure in the Scotland international side but faces strong competition for a midfield place with John McGinn, Armstrong, Ryan Christie, John Fleck and Kenny McLean all in and around the squad with David Turnbull facing big competition just to get in the squad.

One solution that Steve Clarke has found is playing Scott McTominay on the right of a three man central defence but Stewart feels that playing the Manchester United man out of position is no longer an option.

McTominay is now a first team regular at Old Trafford with Fred or Paul Pogba as his partner supporting Bruno Fernandez.

Weighing things up in The Sun, Stewart writes:

McGregor’s levels, meanwhile, have dropped off over the past 18 months. He’s not the player he was. Fatigue, I’m absolutely certain, is a huge part of that. At times, it seems like he has played every game of Neil Lennon’s reign.

He never gets a day off. And this season it looks like it has finally caught up with him. He looks jaded, a little off it. Ryan Christie is the same, he just looks that little bit short of where he should be right now.

So my view is if there’s stiff competition why is McTominay the one being put elsewhere? I just think by using him at right centre-half there is the potential for him to be exploited.

Scotland’s next match is on March 25 when they host Austria in a World Cup qualifier.