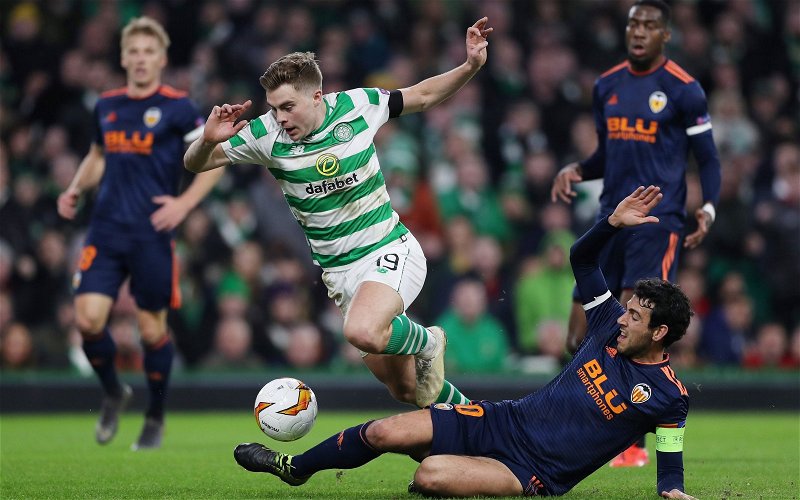 James Forrest has come through a full week of training and could be involved in the Celtic squad that faces Dundee United on Sunday.

The winger has been an internal part of Celtic’s Quadruple Treble success but hasn’t featured in the first team since the Europa League qualifier away to Riga on September 24,

Initially it was hoped that Forrest would be back towards the turn of the year but following ankle surgery his return to action has been delayed.

Discussing the winger with a number of Celtic websites today, John Kennedy said:

He actually trained this week; he has come through the week really well. He’s got through it, looked good, to be fair as the week progressed he has been more and more like himself, what we know.

I will probably sit with James tomorrow morning to address where he is at, we want him to be part of the squad as quickly as possible but he needs to be comfortable with that. He has been out a long time, I know what it is like when you come through surgery, rehab and everything else. You might look good but you might not have full confidence, he might not feel that he has done enough.

Looking at him I’d like him to be part of the squad but ultimately I want James to be comfortable with that as well and we’ll sort that over the next day or two.

After five months out of action playing on the tight surface of Tannadice on Sunday might be too demanding but with one match scheduled before the Scottish Cup tie against Arbroath or Falkirk on April 3 or 4 it looks like Forrest will be able to make a contribution to this season.

His contribution is often overlooked by fans but in his absence neither Jeremie Frimpong or Ryan Christie have been able to match the contribution of the 29-year-old who has spent his entire career at Celtic.