A twitter account incredibly supportive of Neil Lennon claims that the former Celtic boss can shake the whole applecart and throw the May elections into chaos.

Great Pantheon 18 was set up last month with a rush of information blaming everything except Lennon for the collapse of Celtic’s season. Although clearly not the Celtic boss many Celtic fans believe that the account id very close to the former Bolton boss.

Back in October Lennon was highly critical after Ryan Christie, despite his protests, was identified as a close contact of Stuart Armstrong and forced to miss the first Glasgow derby. Arsenal ignored the same instruction on Kieran Tierney.

More recently Nathan Patterson and four team-mates were given Fixed Penalties on February 14 for attending a house party. So far the SFA have taken no action. Back in August within five days of Boli Bolingoli’s flight to Spain coming to light the player had been charged by the SFA with two Celtic matches postponed. 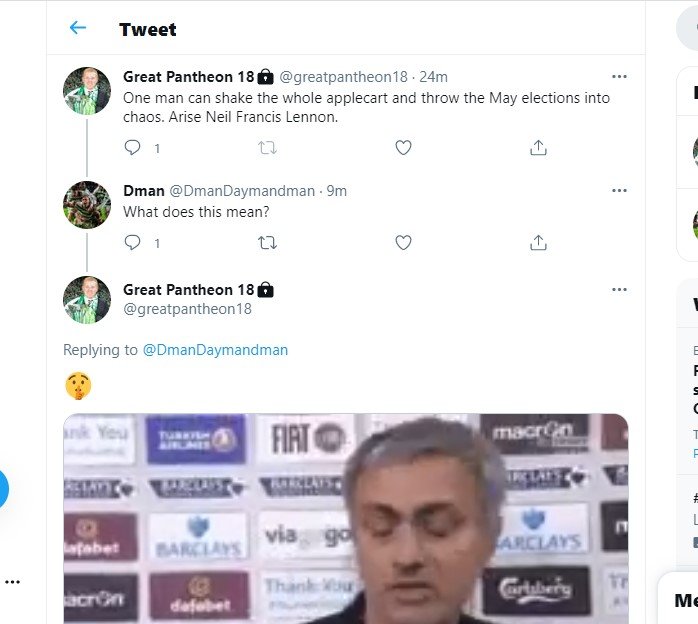 I prefer not to speak, if I speak I’m in big trouble.

So something has went on with the scottish government behind the scenes this season?

Elections to the Scottish Parliament will be held on Thursday May 6. At today’s media conference Nicola Sturgeon stood aside for her Deupty, John Swinney, who described the actions of Ibrox fans as disgusting and claimed that there was a deafening lack of leadership from inside the club.