A report in The Sun claims that Leigh Griffiths is three weeks away from being given a free transfer by Celtic.

It has regularly been reported that the striker is under contract until June 2022 but according to the report that requires Celtic to exercise a clause in his contract by April 30.

Griffiths has yet to complete a full 90 minutes this season with Neil Lennon highly critical of the condition that he returned from Lockdown in.

The 30-year-old has only started one match since the end of January but was substituted after 62 minutes of Saturday’s Scottish Cup win over Falkirk.

LEIGH GRIFFITHS fears he is on a countdown to being FREED by Celtic in the summer — with Aberdeen waiting in the wings.

SunSport can reveal the striker is waiting for a decision on a one-year option which would keep him at Parkhead until the summer of 2022.

It’s understood the deadline for the extension — worth close to £1?million to Griffiths — is April 30. If Celtic inform him they are not taking up the option he will be able to exit on a free transfer at the end of the season.

That would attract keen interest, including from Aberdeen where the frontman’s close pal Scott Brown is heading to become player-assistant manager this summer. 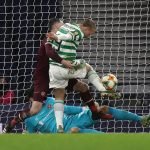 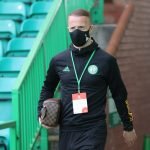 Who makes the decision on Griffiths will be something of a mystery with an Interim Manager and vacancy for the role of Head of Football Operations following Nick Hammond’s departure.

Dom McKay will join Celtic on April 19 but Peter Lawwell will continue as CEO until June 30 and should ultimately decide on whether the option on Griffiths is taken up.

CELTIC are delighted to announce that the club have secured the services of Leigh Griffiths for a further four seasons after the striker signed a new contract today (September 14).

Griffiths put pen to paper on a new contract at Celtic Park this morning which will ensure the century Bhoy will remain in the Hoops until at least the summer of 2022.