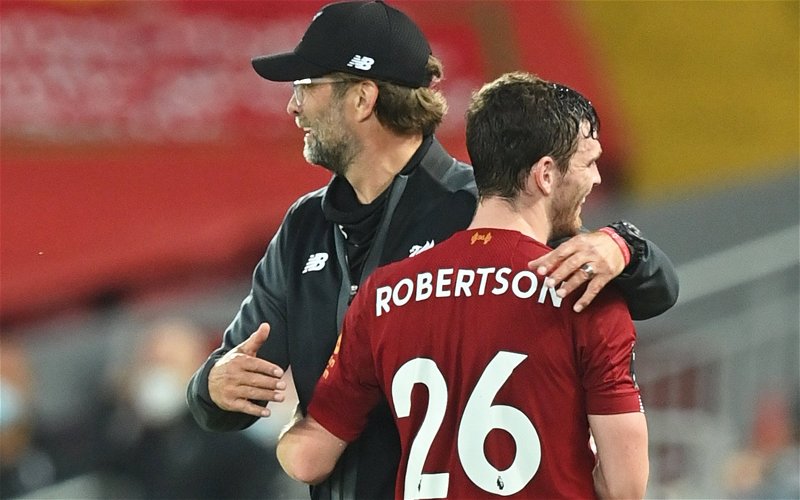 Andy Robertson would love to play for Celtic- but not as an old f**t!

As a teenager he was released by Celtic before being offered a pro contract- setting off on a well chronicled path to Champions League glory via Queens Park, Dundee United and Hull City.

Robertson is now the highest ever paid Scottish footballer with his place in Jurgen Klopp’s Liverpool side virtually guaranteed. Alongside Kieran Tierney he is rated the finest left-back in the EPL.

Steve Clarke has the task of trying to work out the best system to accommodate two outstanding players in his side with Robertson wearing the armband going into the European Championships.

The Celtic connections are never far away, picking up on his appearance on PLZ, The Sun reports Robertson saying:

I get asked about Celtic a lot! My aim is to finish my career at Liverpool but I know how tough it is to stay at the highest level.

I would love to play for Celtic. When I was a young boy growing up I used to say I’d give my best years to Celtic so I don’t want to go there when I’m old and maybe can’t move as much.

The time will come to make that decision but I have a good length of time left on my Liverpool contract. I hope to stay and retire at the club and if I keep going and I feel fit and healthy I’d love to do that.

But if not I’d look at options and I’d love to pull on the Celtic shirt, of course I would. But I don’t want to be an old f**t when I go there – I want to still be able to play well. I don’t want my mates hating on me!

In January 2019 he signed what was described as a new long-term contract at Liverpool, an upgrade on the deal he signed in 2017 following his move from Hull.