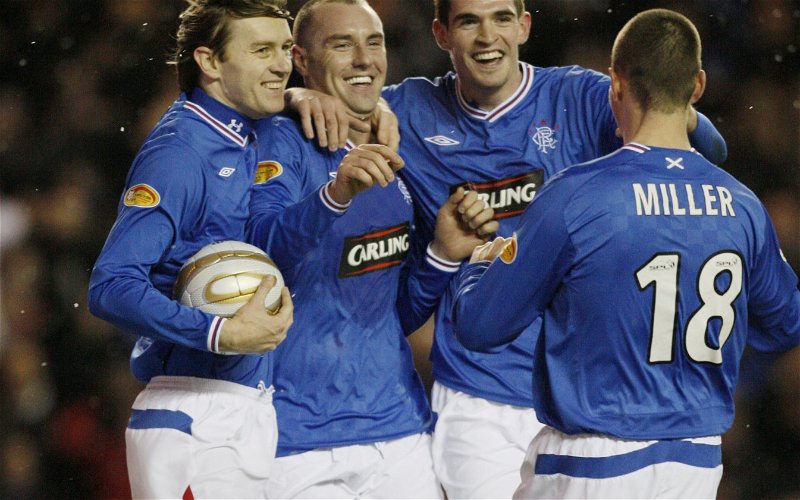 Kris Boyd has absolutely destroyed Kyle Lafferty on the back of Kilmarnock’s relegation to the Championship.

Slamming his former Ibrox team-mate in The Sun Boyd claimed that he has spent longer in the bath than ‘big Kyle’ has with the Ayrshire side.

Lafferty joined Killie in February after being dumped by some other club, although he did score nine goals in the SPFL his only contribution in the Play Off was to score with a penalty when Dundee were 4-1 ahead on aggregate.

It is very rare for two former Ibrox stars to go public with criticism of each other but clearly things weren’t always sweetness and light under Walter Smith despite most of the stars enjoying the benefits of disguised remuneration being stashed into off-shore accounts.

After destroying Youssouf Mulumbu in The Sun, Boyd turned his attention to Lafferty:

Which brings me to supporters turning up outside Rugby Park after Monday night’s game to demonstrate.

It sums up the mentality of some that Kyle Lafferty was lauded as a hero for addressing the fans afterwards and guys like Gary Dicker and Kirk Broadfoot were getting slated on social media.

I have spent longer in the bath than big Kyle has been at the club, so don’t turn round and say he is the only one that gets it.

Yes, he has scored a few goals since coming in near the end of the season but where did he disappear to for those last three games?

Lafferty is now a free agent, again, after his short-term contract expired.