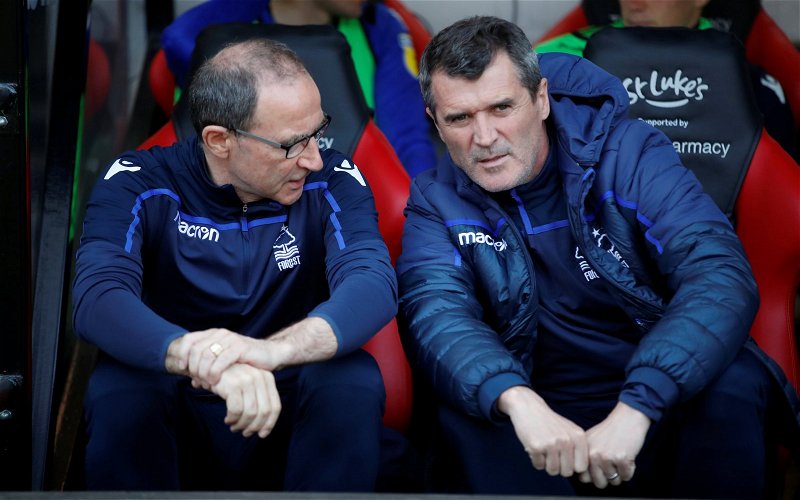 Almost as soon as news of Celtic’s failure to secure Eddie Howe as manager emerged Roy Keane’s name started to trend on Twitter.

The Irishman has been involved in some of ITV’s build up to the European Championships but there was another reason that was causing panic and alarm among Celtic supporters.

Keane was close to succeeding Neil Lennon as manager in 2014, perhaps after another seven years out of management his time may be about to arrive.

Dermot Desmond isn’t the type to look for reflected glory by being associated with footballers but it seems that at least since his brief playing spell at Celtic the former Sunderland boss has the respect of Celtic’s biggest individual shareholder.

Before and after Lennon resigned in February, Keane was linked with the Celtic job but since the start of April almost all speculation has led to Howe.

Now the field appears to be wide open again, all of the names that have recently been discounted are contenders again.

Keane is at the front of the queue, Martin O’Neill is in the background, Paul Lambert will get mentions and Steve Clarke can anticipate questions at his next Scotland media conference.

After a decade out of management, entertaining Sky Sports and ITV viewers it seems that Celtic fans would rather Keane stuck to broadcasting rather than reignite the managerial ambitions last seen at Ipswich in January 2011.

If I’m going out on a limb to guess who the next manager will be, it’s an unfortunate one I’ve come to.

And has done absolutely nothing at management level. Would lose half the dressing room within the first month

When a factor is “Irish” u know we aren’t serious

If I’m going out on a limb to predict that a Roy Keane announcement would be an absolute disaster. Neither being Irish nor a mate of DD is a qualification for being Celtic manager

Don’t even think of Roy Keane instead of Howe, #Celtic.
Don’t.

It’s absolutely fear-inducing seeing your Twitter feed alternate between Roy Keane as the dreaded “alternate candidate,” and people saying it would be a good idea to get Gordon Strachan or Martin O’Neill in for a season.