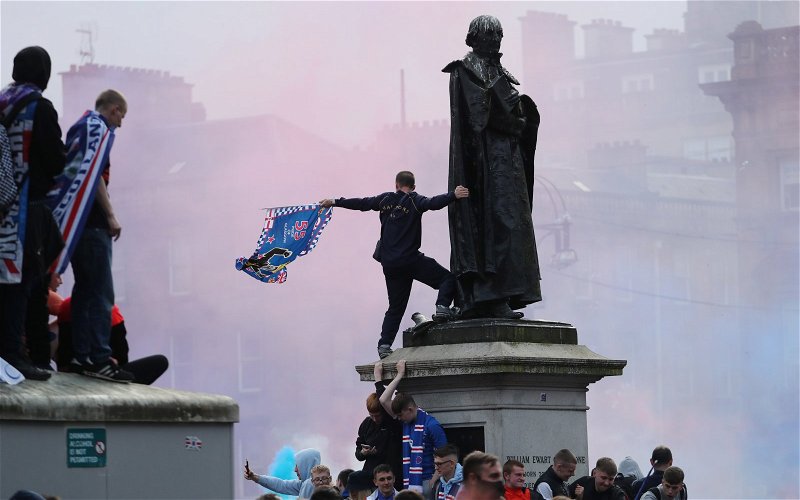 A statue of Queen Victoria was one of the casualties of the George Square carnage.

Loyal fans from Ibrox laid siege on the city centre, causing havoc as they battled with Police Officers while Glasgow was in Lockdown Tier 3 with a large range of restrictions on public movement.

Almost every area of George Square suffered damage including the statue in honour of the British Monarch who ruled as the Empire was built inflicting pain and misery throughout the world.

Victoria sat on her throne from 1837 until 1901, last summer loyalists moved into George Square to protect her statue but thousands of Ibrox fans have inflicted damage on the statue to the longest ever British monarch. It was rumoured that Victoria took a bath once a year.

Statues of Queen Victoria & Prince Albert require significant repair – the Queen Victoria statue has failed a topple test, meaning it is moving on the plinth & has been fenced off for safety reasons.

It’s thought their restoration will run into a five figure sum apiece.

Police Scotland were left virtually powerless as 15,000 Ibrox fans laid siege on the city with George Square and the surrounding areas trashed.

Social Media coverage showed acts of vandalism and violence but strangely BBC Scotland, STV and Sky News opted out of sending in their own news crews to cover the carnage.