Racism was great for ‘Rangers’, their players are no saints- Czech star speaks out 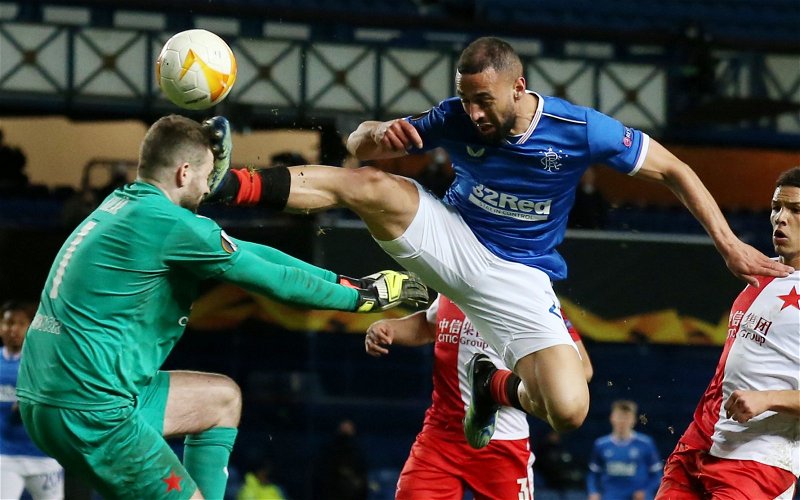 Zdenek Zlamal has called out the deny and deflect campaign from Ibrox over their Europa League defeat to Slavia Prague.

When the draw was made for the last 16 of the competition everyone around Ibrox was looking beyond that round to a future meeting with Arsenal or Manchester United.

Slavia won the home leg 1-0 but that didn’t dent the confidence at Ibrox with Mister Gerrard’s side confident of turning the tie around at home.

The return leg didn’t go to script, the upstarts from the Czech Republic went 2-0 in front with Kemar Roofe and Leon Balogun making it a night of shame with red cards.

In the closing minutes the Ibrox club managed to salvage something from the match as they suddenly became anti-racism activists.

Zlamal had an insight into both clubs, after speaking to Czech publication Idnes the Daily Record reports the Hearts back-up keeper saying:

We had a lot of discussion about the match at my club. There are a lot of guys at Hearts who are die-hard Rangers fans.

Only the racism was discussed. They saw it differently than I did. The subject was quite hot and explosive, now it is calmer.

No one in Scotland spoke about the tackles, only the racism. I pointed out how the match was played. Aggressive football is standard for Scots, but this went too far.

Kemar Roofe kicked Ondrej Kolar in the head. It was a clear intention from him because strikers can peripherally see where the goalkeeper is. The apology was nothing.

The racism was great for Rangers because it covered up all their shortcomings as Slavia beat them. Rangers players are definitely no saints.

The whole thing annoys me because no one has presented any evidence. Innocent until proved guilty is supposed to be a big thing in the west, but that has not happened. I hope that Ondrej will be able to play in the Euros. If he said something racist, I agree with the maximum punishment, but there is no evidence.

Zlamal was a Scottish Cup loser with Hearts in 2019 but picked up a winner’s medal today after moving to St Johnstone on an emergency loan.