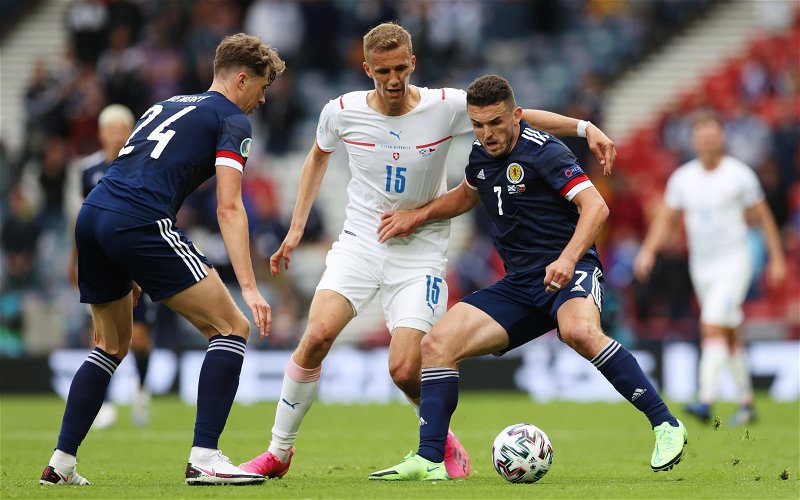 Jack Hendry was one of the fall guys for Scotland’s European Championship defeat from the Czech Republic at Hampden.

With Kieran Tierney out injured the Celtic/Oostende defender was joined by Liam Cooper and Grant Hanley in the centre of a three man defence.

Early in the second half, with memories of his goal against Holland still fresh, Hendry almost equalised when a 20 yard effort bounced off the crossbar.

Within five minutes the roof had fallen in on Scotland, and Hendry.

When his next shot was blocked the ball was quickly played to Patrik Schick who executed the most perfect 49.7 yards shot to send the ball just under the crossbar with David Marshall left tangled in the net.

There were three obvious issues that occupied the watching millions. Schick’s effort was a wonder goal, Marshall was too far out of his goalmouth and Hendry’s decision to shoot was at best questionable.

The debate about the goal will run late into the night and beyond but the bottom line is that Scotland are pointless ahead of playing two of the semi-finalists from the 2018 World Cup Finals.

Jack Hendry very much not managing the occasion. Don’t think he choses to shoot if this is a different game. Crazy to think it was 6 seconds between that and the goal.

Agreed. The whole thing starts with Jack Hendry thinking he’s Erling Haaland and trying to shoot from 30 yards out. When it rebounds he’s caught too far up the pitch leaving us short at the back. Omnishambles springs to mind ?

Jack Hendry shouldn’t be trying to shoot from 30 yards out with so many bodies in front him.

Bang on here the fault lies with Jack hendry every player in front of him apart from Marshall and he shoots from 45 yards instead of playing it wide , it was amateur stuff .

Jack Hendry wasn’t the problem today, to be fair.

I don’t blame Marshall for the second goal… I blame Jack Hendry for that, why oh why was he trying to shoot from there? Pass the ball out right

Hopefully now that game puts an end to the theory that Jack Hendry is a good player. Not to single him out as everyone else was poor today mind.

A did not wait 23 years just to see Jack Hendry shoot from 40 yards and David Marshall play as a centre mid. https://t.co/oDxYHnSrJO