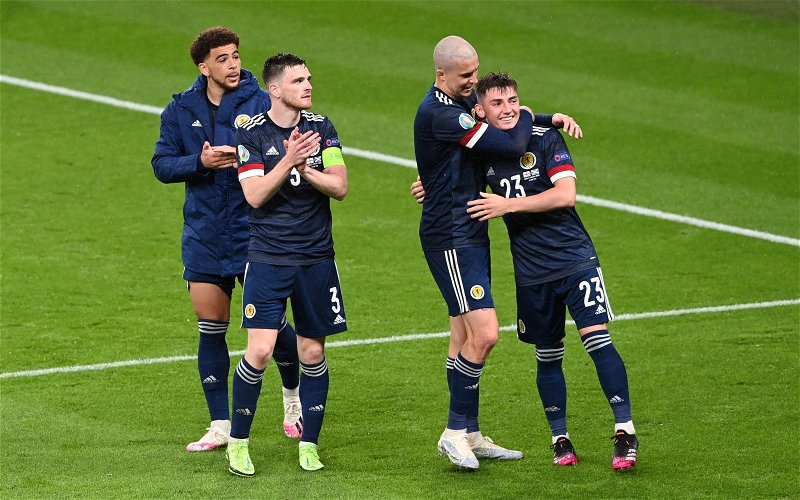 Among the many incidents to impact on Celtic’s disastrous season was the fall-out from the January trip to Dubai.

The training trip was certainly inadvisable but it was perfectly legal, sanctioned through the SFA by the Scottish Government.

When the team returned home Chris Jullien’s positive test resulted in 13 players plus John Kennedy and Neil Lennon having to self-isolate.

After watching two matches from home Neil Lennon held an explosive media conference during which he accused the authorities of moving the goalposts.

During Monday Celtic fans saw a similar incident develop but with a very different outcome.

Soon after 10am it was announced that Billy Gilmour had tested positive and had to self-isolate at a hotel in Darlington. It seemed only a matter of time before other players were named as close contacts and made to self-isolate, on the day before the critical match against Croatia.

Since Friday Gilmour had shared a changing room at Wembley, celebrated with team-mates afterwards, flown back to Teeside and into the Darlington hotel, dined with team-mates, played golf and trained with them. Captain Andy Robertson shared then deleted a video showing him playing Table Tennis with Gilmour and John McGinn.

After Gilmour’s test results the Scotland squad took coaches to Teeside Airport, flew to Glasgow and checked into their third hotel in four days.

How they have all managed to avoid being a close contact is something that has more than puzzled Celtic supporters reviewing the events of January and Dubai.

What’s the difference between Billy ‘the ghost’ Gilmour and Chris Jullien ‘re close contacts ? Easy. One plays for Scotland, the other plays for Celtic. @ScottishFA yer having a laugh ? ???

Rules are the same in England pic.twitter.com/aiwDlhyZbo

The whole thing is a farce to be fair. What’s the difference between Gilmour taking a positive test, and John Fleck Christopher Jullien? 6 Scotland players and 13 Celtic players had to isolate. They are literally making it up as they go along

The hypocrisy of the Scottish Media is quite something!

Yet nothing being asked about the lack of contacts to Billy Gilmour.

When jullien tested positive for covid we had to isolate a near full team now gilmour has tested positive along with Ben chilwell and mason mount and it’s only 5 who have to isolate . This is the difference when your not Celtic ..the rules are absolutely stinkin and moved to suit

I hope Gilmour is the only player unavailable and we go on to qaulify.. However one thing you cannot turn a blind eye too is that Celtic have been held to a totally different standard in relation to covid breaches since it began. Some farcical calls in comparison to ours.

Yeah i agree the whole thing is ridiculous, especially considering he was playing table tennis with Robbo and McGinn. My guess is gilmour chatted with Mount and Chillwell after the game indoors for a while. Its mental from the SFA considering they made 15 celtic players isolate

Where they not different in Dubai

See if a person in a bubble tests positive for covid, does that mean the whole bubble has to isolate or just the infected person? Would that bubble be considered to be close contacts? @NicolaSturgeon @scotgov @CelticFC @ScottishFA

Andy Robertson posted a video of him, Gilmour and another player in close contact, indoors, playing table tennis… but only Gilmour has got the virus. ?