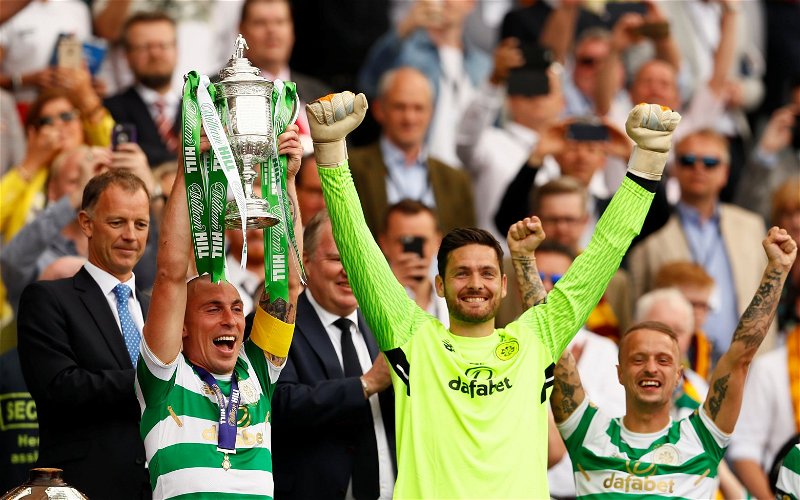 Michael Stewart believes that Celtic will come face-to-face with one of their biggest mistakes at Tynecastle tonight.

Just before 8pm Callum McGregor will be called to the centre by Bobby Madden where he’ll meet his opposite number at Tynecastle- Craig Gordon.

Thoughts of the 2016/17 season will come flooding back for both men as they battled through an Invincible season that started off at Tynecastle before Tom Rogic’s crowning glory at Hampden.

When the Australian steered the ball into the Aberdeen net Gordon sank to his knees in one of the iconic moments of the season. For other reasons perhaps McGregor will do the same when he reads over the team-sheet or joins the Huddle.

The decline of Celtic in the last three years is marked, over the last 14 months it is sharp with the goalkeeping position in the focus after another inglorious Champions League exit.

In The Sun, Stewart states:

WHAT Ange Postecoglou would do for someone like Craig Gordon right now. A goalkeeper the Celtic boss could actually rely on, a safe pair of hands amid the storm.

Instead, Gordon will be in the opposite goal for Hearts against the Hoops because they let him go. And if anything sums up the mess they’re in, it’s that very decision.

Put simply, they blew it when they chose not to offer him a contract last year. Let’s face it, it’s not as if the big man would have been that difficult to deal with.

It wouldn’t have cost the earth to keep him. But instead they were content to let him walk — and spend big on Vasilis Barkas instead.

I’ll let you do the maths on that one. And their loss has gone on to become Hearts’ gain. Gordon will face his old club on the back of 11 clean sheets for the Jambos. He’ll also be wearing the captain’s armband having been entrusted with the role by Robbie Neilson.

Ange Postecoglou was far from the decision making over Gordon but if things go wrong in Edinburgh today he’ll be in the spotlight while former CEO Peter Lawwell lurks away in the shadows.