‘Anybody saw Andy Halliday?’ ‘useless without madden’ ‘just runs about trying to look hard’ Halliday gets it tight from Celtic fans 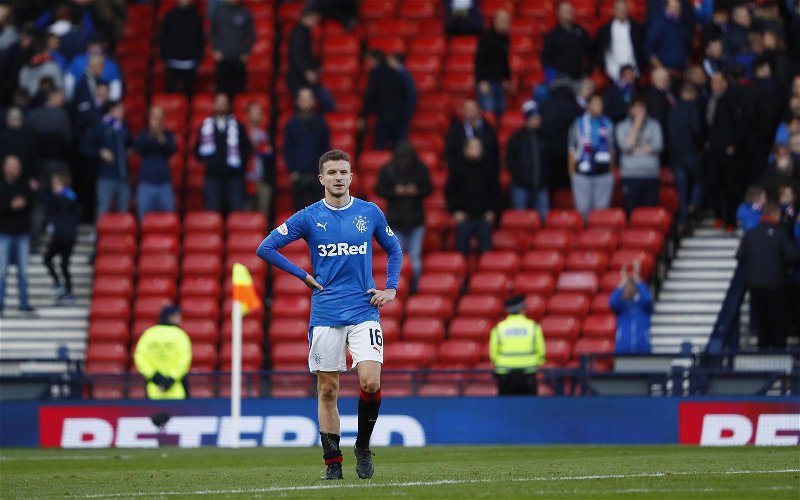 Player/pundit Andy Halliday was hooked off by Robbie Neilson after 45 minutes of Celtic’s Premier Sports Cup victory over Hearts.

Over the last year the former Bradford utility man has thrown himself all-in to a career in the media, cultivating the image of being a decent guy and one of the lads.

When it comes to playing against Celtic he has a few painful memories that he can call on. In 2018 he had a rant at Graeme Murty when he substituted at Hampden in a 4-0 rout, a few weeks later he was being serenaded as Celtic won 5-0 to clinch the title in style.

A fortnight ago the 29-year-old enjoyed a measure of revenge when Hearts beat Celtic in the SPFL opener but the game wasn’t without controversy with his podcast buddy Bobby Madden allowing a brutal attack on Callum McGregor’s heel to go unpunished.

Halliday never got a look in today. Celtic enjoyed 82% possession with Hearts chasing shadows, their media star barely got on the ball to be booed by Celtic fans but on Twitter he was an easy target.

Anybody saw Andy Halliday? or is he still running aboot trying tae get near the ball?

First half was the worst Hearts ‘performance’ I’ve seen in a long, long time. 17% possession. Was 2-0 nil going on 5 or 6. Halliday going off and an attack-minded winger made the difference in the second half.

andy Halliday was substituted at half time . i didn’t even notice that …. How he makes a living as a football player i will never know ..

Ralston is taking it upon himself to launch an all out assault on Halliday?

Can we please stop this myth that Halliday is a good player, he wasn’t alone but that 1st half he was awful and him going off at half time is a highlight for me. At left back or wing back he is fine but in midfield he is dreadful. Beni has bn fantastic

Halliday is such a funny footballer. He has 0 ability and just runs about trying to look hard

Looking forward to seeing Andy Halliday on open goal praising the tactical genius of his manager this week….

Halliday the coward not coming out for the second half.

Andy Halliday, Bobby Madden, The Terrace, Juanjo… Your boys took one hell of a beating.