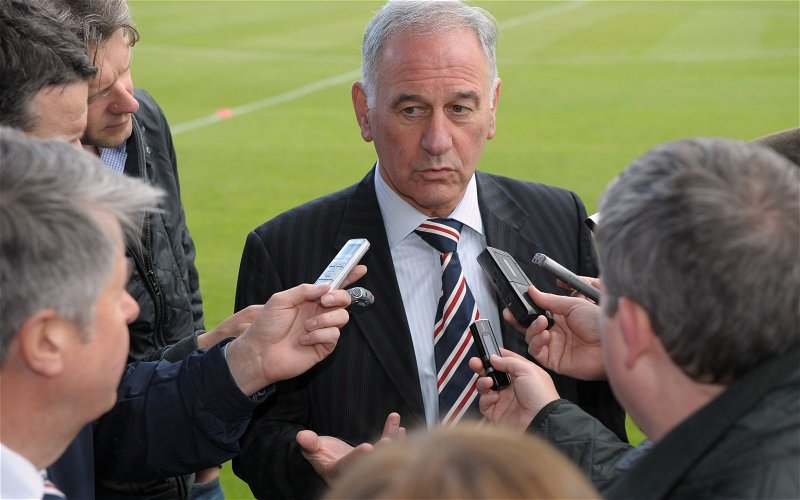 Charles Green has confirmed the newco status of the Ibrox club he founded in 2012.

While the BBC and others conveniently overlook the administration and liquidation followed by a Five Way Agreement with the SFA, SPL and SFL that parachuted the new club into the Third Division, the Petrofac Irn Bru Tunnocks Challenge Cup and the first rounds of the League Cup and Scottish Cup.

Green was the preferred bidder selected by Duff and Phelps but his attempt at a CVA was cruelly rejected by Her Majesty who was down £20m and waiting on a verdict on the disguised remuneration scam operated by Dave Murray.

Hearts, Dundee, Motherwell, Partick Thistle, Livingston and Dunfermline all managed to achieve a CVA but rejection from Elizabeth Windsor condemned Rangers to football’s mortuary alongside Third Lanark, Airdrie and Gretna.

Picking up on his podcast with Andy Gray and Richard Keys, Glasgow Live reports Green saying:

We’re now classed by the Scottish FA and everyone as a new club. But I had to pay all the oldco’s debts. I used to argue, if we’re the oldco that’s fine, we’ll pay all the debts. If we’re newco we’re newco, we haven’t got the debts.

Under Green finances were kept in check but it is believed that losses of £2m a month last year have continued. Failure to beat Malmo could prove just as costly with the Swedes putting paid to Ally McCoist’s hopes in 2011 with liquidation less than a year later.