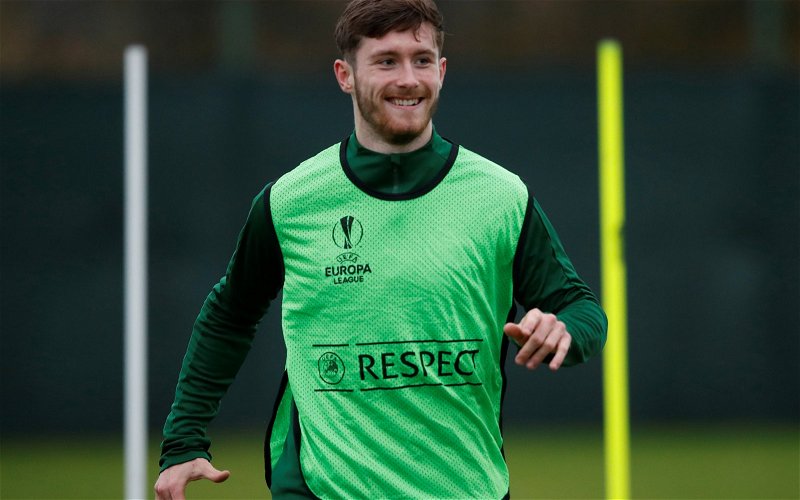 Tony Ralston is doing his best to make up for the lost season in his Celtic career.

Five matches in with Ange Postecoglou and it would be difficult to name a player that has had a bigger impact on the team.

The problem right-back position is becoming less of an issue with each passing game while his left foot is going to be a serious contender in any Goal of the Month competition.

Before Lockdown Ralston made an impressive 21 appearances on loan at St Johnstone, prior to that he had played four matches under Neil Lennon before he switched his attention to Hatem Abd Elhamed, Moritz Bauer and Jeremie Frimpong.

Two of that trio were still in place last season as Celtic’s season fell apart, what seemed like the final insult to Ralston arrived when Jonjoe Kenny was signed on loan as his own contract looked like petering out.

The previous summer Jozo Simunovic and Jonny Hayes were released despite contributing to the 9-in-a-row success, it looked bleak for Ralston but when he was given an unexpected chance he didn’t mess about.

Postecoglou has shown faith in the 22-year-old who appreciates the opportunity and change of mentality from last season’s cycle of doom.

Speaking to The Sun, Ralston said:

We’ve been working hard in training and analysing a lot on how we want to play. It’s nice to go in to a game and put it all together but it’s important we kick on now and keep playing the right way with intent and the results will come.

The clean sheet was pleasing. We defended well as a back four and goalkeeper, but also as a team. The pressing front to back as a unit was brilliant and it’s important we keep that going in the future.

I never thought my left foot was much use! I’m delighted to get another goal. The most important thing is contributing to the team. Hopefully I can continue.

I’ve just had to stay focused when I’ve been out of the team and work hard behind the scenes to make sure I’m as fit as possible.

So when the chance came I was able to take it. I kept myself right and fortunately I have had the opportunity this season.

I’m enjoying playing and being in the team. I just need to make sure I keep the right mindset in each game and in training.

It’s a new role for me to play this way, but I’m really enjoying it. It’s a free role to get inside and get on the ball and be involved. I’m just trying to perform the best I can and doing what the manager is telling me to do.

Ralston’s best is certainly having an impact on the team, with three weeks left in the transfer window the emphasis may be switching towards a back-up rather than his replacement.