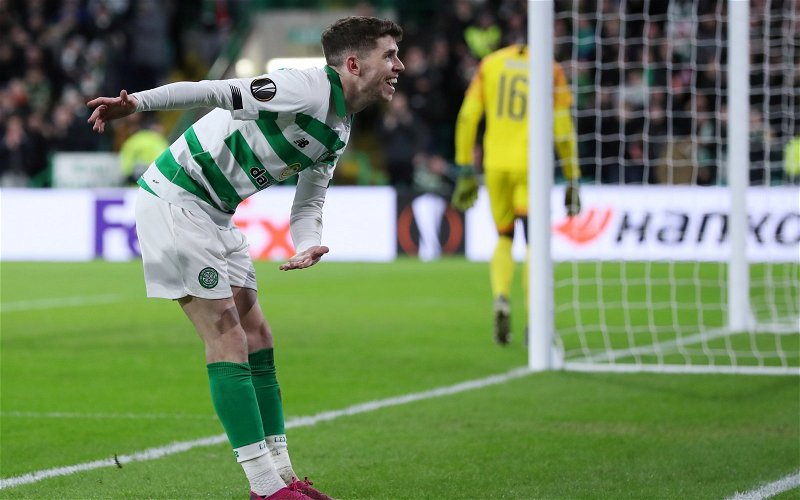 Ryan Christie IS open to extending his Celtic contract.

The midfielder is out of contract in January, making him free to sign a pre-contract deal with any non-Scottish club.

Christie struggled to make an impact at Celtic after moving from Inverness Caley Thistle in the summer of 2015 but after three loans spells he exploded into Brendan Rodgers’ plans in the autumn of 2018.

In November he signed a new contract, celebrating with the only goal of the game in the Betfred Cup Final win over Aberdeen as his Celtic career burst into action.

Since he signed that contract a number of big earners have joined the club- such as Albian Ajeti- with last season’s loan signings on wages that would dwarf Christie’s current deal.

With former team-mates Kris Ajer, Stuart Armstrong and Kieran Tierney all in the EPL Christie will know the riches on offer but the wrong choice of club at the age of 26 could have serious implications for his career.

The Celts boss praised the Scotland star several times last week, including after a superb goal as a sub in the 4-2 Europa League qualifying triumph over Jablonec, and has made it clear he’d like him to stay.

Contrary to rumours, Christie is believed to be very much open to the opportunity to sign a new contract after almost 150 appearances since joining from Caley Thistle in 2015.

He enjoys working with Postecoglou and is now wondering if the club hierarchy deliver something for him to consider.

Christie was heavily involved in assists during Celtic’s 6-0 win over Dundee today, following on from his late goal to seal a 4-2 win over Jablonec on Thursday.