Brighton are reported to have made an initial bid for Odsonne Edouard with the player apparently keen to leave.

Over the last two years there has been regular speculation about Edouard’s departure but with less than a year left to run on his contract Celtic will be keen to do business.

So far this season the former Paris Saint Germain striker has been well short of top form, away to Jablonec he was left on the bench with Kyogo Furuhashi given his debut.

Brighton have finally made their move to sign Celtic striker Odsonne Edouard. The English Premier League side hope to tie up an £18million deal for the French U21 international early next week.

Following weeks of speculation, the Seagulls have submitted an opening offer to Celtic. Brighton have finally made their move to sign Celtic striker Odsonne Edouard (above).

And, with Edouard keen to leave, negotiations will continue over the weekend. Signed from Paris Saint Germain for £9m in August 2017, the 23-year-old has now entered the final year of his contract and would be free to speak to interested clubs about a pre-contract agreement from January.

PSG are due 40 per cent of any profit from Edouard’s sale, with Celtic keen to secure as close to £20m as possible.

Should Celtic accept the first £20m bid for Odsonne Edouard?

Yes, get it done. Move on 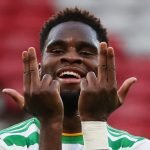 No, he is worth a good bit more 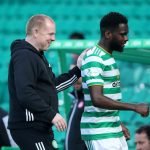 The quicker that a deal can be completed the better for Celtic with Ange Postecoglou seriously short of striking options.

Albian Ajeti and Leigh Griffiths have barely featured so far this season with Jonathan Alfolabi moving out on loan to Ayr United.

With close to £12m boosting the club coffers Postecoglou will be looking to see a few deals pushed through from the sale of Edouard.