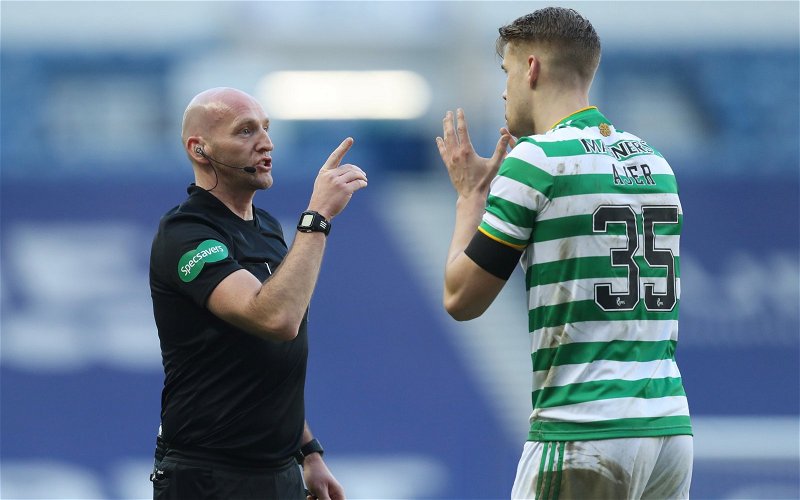 James McPake has accused Bobby Madden of gloating over Dundee missing a penalty in their 1-0 defeat to Sevco today.

Trailing to a first half goal from Joe Aribo, Dundee looked likely to be back on level terms an hour into the second half but Jon McLaughlin pulled down Paul McMullen as he prepared to equalise.

Madden decided that the offence was only worth a yellow card with former Ibrox star Jason Cummings having his penalty kicked clear by McLaughlin.

After the game McPake approached Madden for an explanation, after a brief exchange he turned away only to be hit with a call of ‘you missed the penalty anyway’ which prompted a reaction from the Dundee boss that resulted in a red card.

@ClydeSSB @gordonduncan7 @Hannahnaman @shinjukushug James McPake says Bobby Madden told him, you missed the Penalty away! In other words, i don’t normally give a Pen against my favourite team!

Today was just Madden’s third SPFL match of the season, his other two involved his Podcasting buddy Andy Halliday.

The East Kilbride based referee has been involved in a string of controversies involving the Ibrox side, in January he went out of his way to avoid disciplining Alfredo Morelos during a Glasgow derby before jumping at the chance to red card Nir Bitton.

As much as I admire @JamesMcPake5 he shouldn’t have allowed Cummings to take the penalty! Wasn’t surprised he missed it against his former Club and the team he supports! Bobby Madden’s comments to James were disgraceful and highlights the corruption within Scottish football!