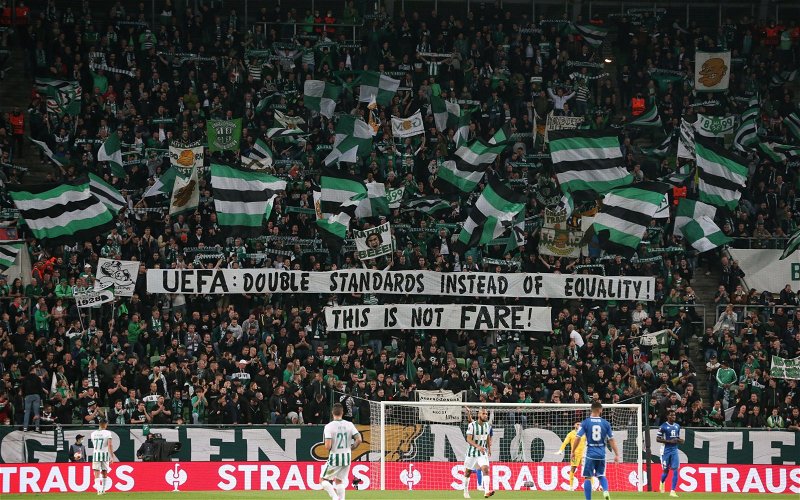 Ferencvaros have issued an incredible warning to the 279 fans that will have tickets for Tuesday’s Europa League match against Celtic.

Hungarian football is in the UEFA spotlight for a number of incidents since the European Championship matches in Budapest with an investigation underway to incidents at Wembley last night.

There has been strong supporter opposition to players taking the knee but today’s Ferencvaros statement wants fans against Nazi salutes or anti-Semitic actions.

UEFA take a hard line on a number of issues but the fact that a club is warning fans in advance will no doubt alert the UEFA delegates at next week’s match which kicks off at 2.30pm.

That kick off time is likely to see the stadium half full but the attention will be very much on the away fans with their own club highlighting their concerns in advance of the match.

We would like to draw the attention of all our ticket buyers to the fact that during the match, in the immediate vicinity of the stadium, any hand gestures that UEFA may interpret as a Nazi flattery or an anti-Semitic symbol should be warned by their fellow fans. The “heart to sky” arm movement with one hand cannot be done at all! The spectator may not bring any pyrotechnic devices, incense, firecrackers, sound grenades into the stadium. We would like to draw the attention of our fans to the fact that expressions that offend the opponent, the opponent’s supporters, the judges, the referees with a gender identity tag or a reference to gender are also defined by UEFA as discriminatory, obscene, discriminatory, insulting or politically discriminating against sexual minorities. even if it happened in Hungarian.

The European Football Association (as well as UEFA) interprets the rigm and inscription as a criminal group, a criminal organization, as an insult or a political manifestation, and the club can be severely punished. As a result of the experience of the Germany-Hungary European Championship match and the Hungary-England World Cup qualifiers, the behaviour of the Hungarian fans, and thus the Ferencvaros fans inside and outside the stadium, is given special attention.

Celtic and Ferencvaros have both lost their opening group matches in the Europa League, failure to win on Tuesday will almost certainly lead to elimination from the competition.