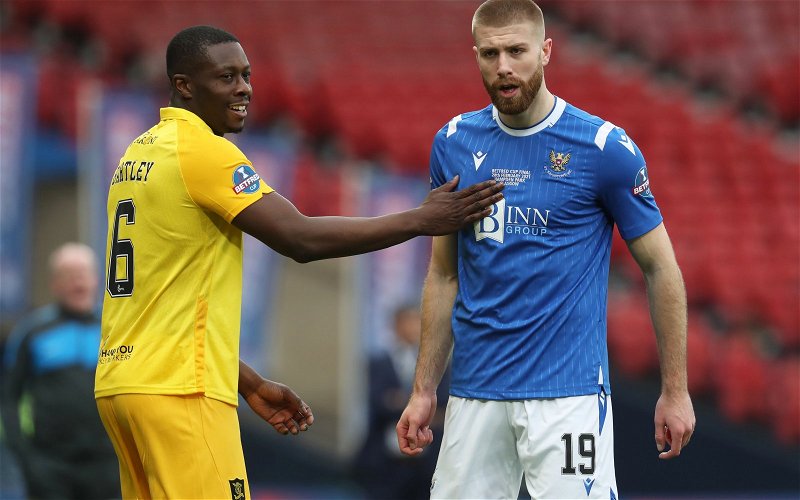 Marvin Bartley has jumped to the defence of Joe Aribo after his brutal lunge at Hearts midfielder Cammy Devlin.

The Livingston coach has become something of a go-to guy in the media to defend, deny and deflect any controversies around Sevco.

In the 35th minute of yesterday’s match Aribo took a touch on the ball that resembled peak Kenny Miller, he then lunged dangerously after the ball wiping out Devlin.

Referee Don Robertson had a clear view of the incident, a fortnight after Ryan Porteous was sent off at Ibrox Robertson decided that a yellow card and a stern warning was enough punishment.

Picking up on his comments on BBC Sportsound, the Daily Record reports Bartley saying:

He (Aribo) takes a loose touch, and then kind of stretches after the ball. Definitely the stills look a lot worse.

Listen, if I’m on the sidelines and that’s against Livingston I’m screaming for a red card all day, but if that’s me as a player, there is no real lunge.

There is no real; he’s not going in uncontrollably. He’s had a loose touch, he’s tried to stretch for it, the Hearts player has got there before him.

If you freeze frame a lot of tackles that maybe i’ve done you would be calling for a red card. I think the referee has made the right decision.

Yesterday the incident passed without comment from broadcasters and publishers but was picked up on by social media.

No-one was referring to stills or freeze-frame, a video clip of the incident was widely circulated after BBC Sportscene decided not to broadcast the clash.

The last time that a Scottish referee red carded an Ibrox star was in December 2019, this year Kemar Roofe, Leon Balogun, John Lundstram and Glen Kamara have been sent off in European matches.

Every reporter and pundit who gave Porteous it stinking for the last couple of weeks will surely be doing the same to Aribo, a red card ever day of the week pic.twitter.com/eCevGObPwi