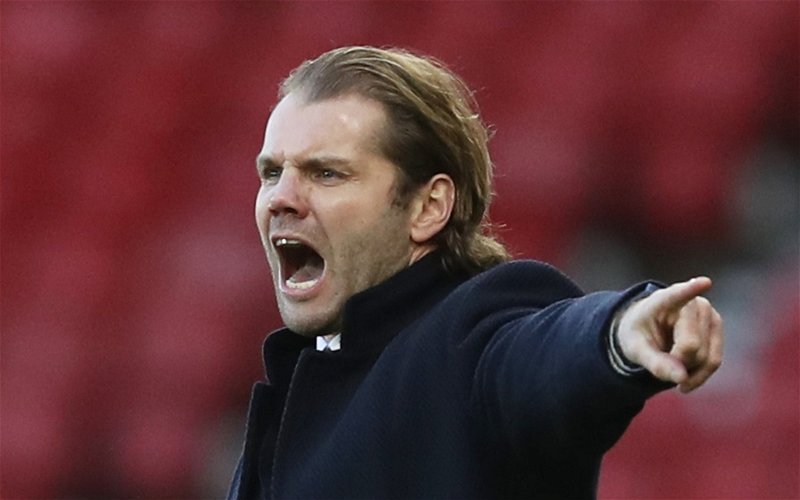 Robbie Neilson has hit out at Don Robertson for sending him off at Ibrox on Saturday- something that no Scottish referee has done to a home player in more than two years.

Trailing 1-0 to a first half goal from John Lundstram, Hearts were pushing for an equaliser to preserve their unbeaten start to the SPFL season. Andy Halliday remained on the bench.

Tussling for a ball close to the touchline Stephen Kingsley won a throw in off of Juninho Bacuna, looking to stall the game the Ibrox ace raised his hand to Kingsley’s throat in a strangling motion.

Neilson was incensed at the attempted time wasting and the actions of the former Huddersfield star, for his actions he was sent from the dug-out, missing Craig Halkett’s 90th minute equaliser.

Speaking to the Daily Record, the Hearts boss said:

I didn’t see the goal but I just heard the silence, which was nice. I was delighted. I was in the tunnel area and couldn’t get down. I was disappointed to get the second yellow, but that’s football.

I’m more disappointed with the fourth official. The boy grabbed Stephen Kingsley by the throat right in front of him.

It’s a red card. He didn’t do it so we complained and I complained again and got a second one but, look, when you come to these places you are not going to get those decisions. It was a stonewaller.

No Sevco player has been sent off since Alfredo Morelos was red carded in stoppage time against Celtic in December 2019. Leon Balogun, Kemar Roofe, Lundstram and Glen Kamara have been sent off in European matches this year.

Euan Anderson was the fourth official at Ibrox, he is a school-teacher in Clydebank.

Right in front of the Fourth Official as well..

Fair play to Kingsley not throwing himself to the ground ?? pic.twitter.com/eKwbNyv9VR