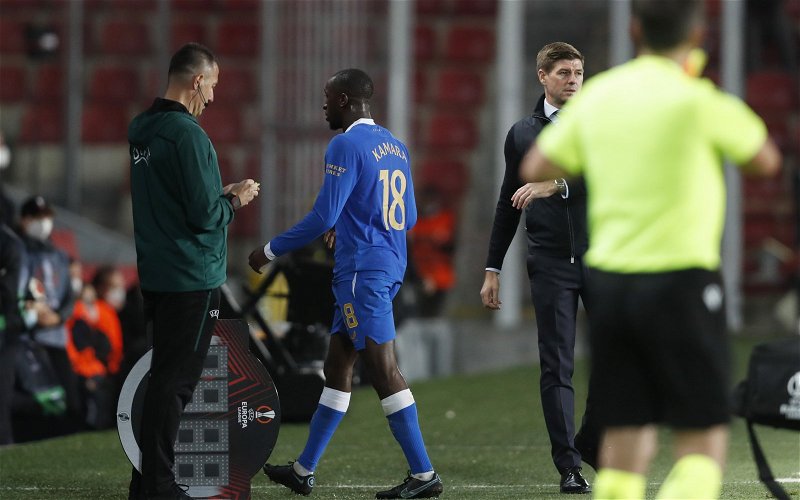 UEFA won’t be taking any action against Sparta Prague despite a witch-hunt stirred up by Sevco and their sympathisers.

During the recent 1-0 defeat to Sparta Prague in a Europa League tie Glen Kamara was booed by a crowd of Prague schoolchildren who were allowed to attend the match. Following a defeat from Slavia Prague in March the Ibrox star was given a three match UEFA suspension for an assault on a Slavia player after the final whistle.

Sparta Prague will not be subject to UEFA sanctions after a probe into allegations of racism towards Rangers’ Glen Kamara found “insufficient evidence”.

Kamara was booed and jeered throughout his return to Prague but with other players of colour on the park not getting abuse UEFA have decided that there is nothing to investigate.

This afternoon they announced:

In accordance with Article 31(4) of the UEFA Disciplinary Regulations, a UEFA Ethics and Disciplinary Inspector was appointed to conduct a disciplinary investigation regarding potential
discriminatory incidents which allegedly occurred during the 2021/22 UEFA Europa League group stage match between AC Sparta Praha and Rangers FC played on 30 September 2021.

The investigation has now concluded that there was insufficient evidence of racism or discriminatory conduct at the match to warrant the opening of disciplinary proceedings against AC Sparta Praha.

Further anger is expected from Ibrox, Kamara will be missing from next week’s match against Brondby as he serves his second UEFA ban of the season.

Despite Gerrard’s exceptional record in Europe his side are pointless and goal-less after two matches on this season’s Europa League campaign. In six matches this season his side has won once, drew once and lost four times.