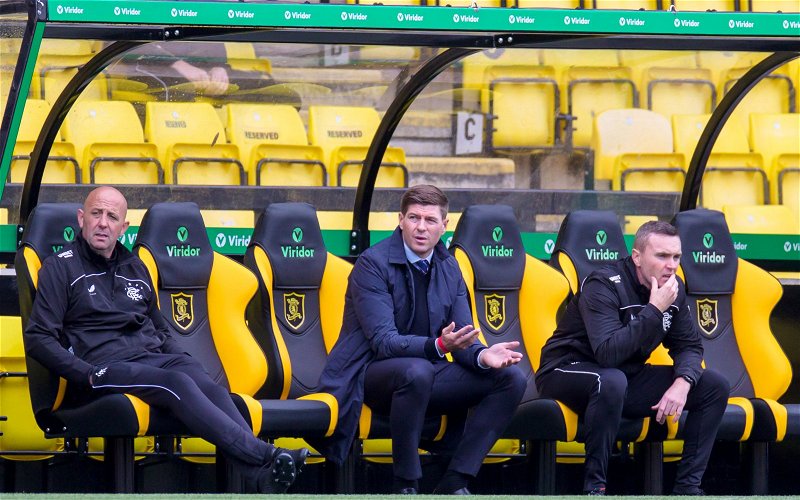 Aston Villa have announced the complete clear out of the Ibrox backroom staff.

On Remembrance Day the Birmingham outfit paraded a grinning Steven Gerrard across social media with a slow drip feed since then hinting that the former Sevco boss won’t be lonely in his new job.

Following his appointment as Head Coach of Aston Villa, Steven Gerrard’s backroom team has been confirmed. ?

Goalkeeping coach Colin Stewart has been left at Ibrox to keep Jimmy Bell company, if there isn’t a new manager announced this weekend Graeme Murty will take training on Monday to prepare for the League Cup semi-final against Hibs on Sunday.

Murty has had two previous stints as caretaker with the fear of a third spell putting focus on the urgency to bring in a replacement for Gerrard.

Giovanni van Bronckhorst is reported to be jetting in to London for talks about taking charge but that sounds like the old trusted template from transfers in the David Murray era.

The next manager is expected to be currently out of work with the £2m compensation from Villa being used to cover one month of losses as Douglas Park and Dave King continue with their war or words and loans.