Double standards? What happened in 2019 when James Tavernier attacked a Hibs fan? 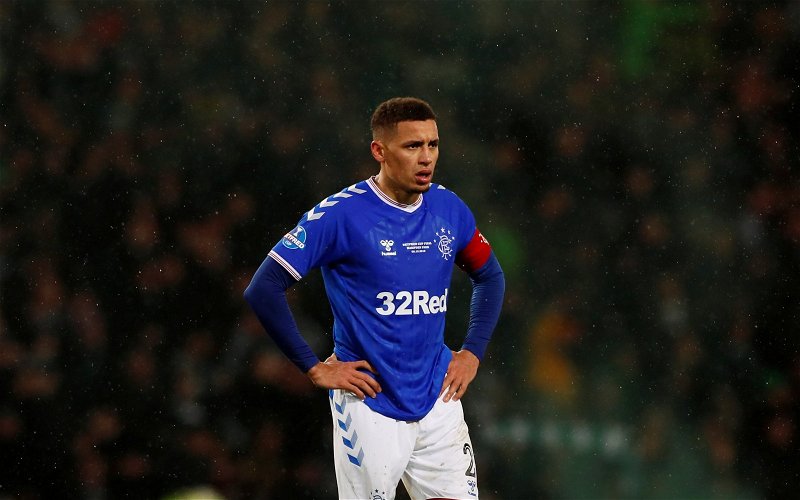 A few apologists for Bobby Madden are out and about after yesterday’s incredible performance at Tannadice.

Soon after sending off Dundee United’s Callum Butcher Aberdeen were pushing for a breakthrough on the brink of half time.

Racing in at the back-post Funso Ojo’s momentum carried him off the playing area. Tannadice, like Tynecastle and a few other Scottish grounds is tight for space, as Ojo hurdled an advertising hoarding he took action to avoid a ball boy and put the brakes on as he approached the barrier at the front of the stand.

A Dundee United fan aggressively moved towards Ojo, making contact with the Dons midfielder who after taking a step back regained his ground, still on the right side of the barrier.

Having booked Ojo in the 40th minute Madden again reached for his cards to leave Aberdeen with 10 men for the second half.

It was a ridiculous decision by Madden but according to some he was following the letter of the law, strangely in a similar situation in March 2019 Steven McLean took no action against James Tavernier when he raised his hands to a Hibs fan at Easter Road.

You guessed it, no card for Tavernier… pic.twitter.com/TjpKw6nHIj

McLean watched Tavernier in an exchange with a fan, the Ibrox skipper raised his arms but wasn’t booked. At the time no-one made any issue, Tavernier showed some restraint while looking after himself, just as Ojo did at Tannadice yesterday.

Sticking to the letter of the law is something of a novelty for Madden as he has repeatedly demonstrated this year.

With Scotland in Tier 4 of lockdown the East Kilbride based referee ignored the law of the land as he chased after a match fee from Ross County v Celtic in February after he had spent a week in close contact with David Roome who tested positive after a jolly in Athens. Fortunately the SFA intervened late in the day to drop Madden and bring in a different referee.

In January Alfredo Morelos raked his studs down the heel of Jeremie Frimpong in the third minute of a Glasgow derby, Madden opted to ignore the letter of the law.

Later in that match he got into a bear-hug to restrain Morelos from attacking Celtic players, again no card was required.

In the opening match of the season Madden’s podcast buddy Andy Halliday attacked the heel of Callum McGregor, the letter of the law was ignored as the former Livingston and Bradford utility man avoided any cards.

Madden was put in charge of three out of Celtic’s first 12 SPFL Premiership matches this season despite the SFA using 15 others in the top flight.