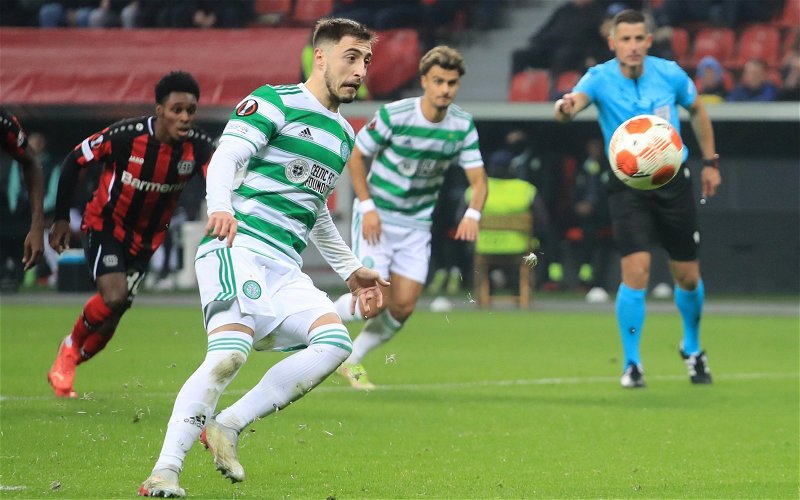 Josip Juranovic scored one of the cheekiest goals in Celtic’s European history to level the scores tonight in Leverkusen.

It was a memorable strike but after being in front in the 80th minute two late goals for the home side meant that the hoops tumbled into the Europa Conference.

There was drama in the 40th minute as the referee consulted with his pitch-side monitor then pointed to the penalty spot after the home keeper had wiped out Kyogo Furuhashi.

Juaranovic was restored to penalty duties and showed all of the confidence in the world to dink a Panenka style effort in off the underside of the crossbar.

The Croatian scores from the spot for Celtic with a panenka! ?#UEL pic.twitter.com/sr6w1oCYdD

Two inches higher and fingers would have been pointed at the Croatian but in Germany tonight Juranovic was the hero.

A 16th minute header from Robert Andrich had given Leverkusen the lead but Celtic played their way into the match before the 40th minute drama that brought the scores level.

Jota put Celtic in front in the 56th minute but the Germans weren’t to be denied with two late goals putting Leverkusen into the last 16 of the Europa League while Celtic prepare for their first ever Conference appearance.