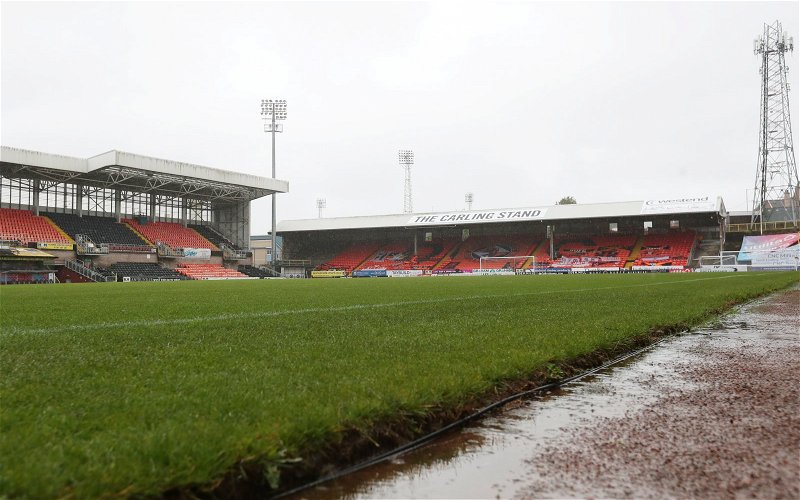 Celtic’s match against Dundee United on Sunday will go ahead as planned but in front of a much reduced away support.

Damage caused by Storm Arwen hasn’t been repaired meaning that the Jerry Kerr Stand will be closed for Sunday’s match.

Away fans are traditionally given a large chunk of that stand but it will be empty when Sunday’s game kicks off at noon in front of the Sky Sports cameras.

Following our statement earlier this week regarding the Storm Arwen damage to the Jerry Kerr Stand roof and having subsequently commissioned professional assessment of the damages, we have reluctantly taken the decision to close the Jerry Kerr Stand for Sunday’s fixture versus Celtic due to ongoing safety concerns.

Work has been ongoing since the weekend in an attempt to ensure the stand could be used by spectators but due to the extent of the damage and concerns remaining regarding the risk to spectators, we have been advised by the structural engineering company in conjunction with Dundee City Council Building Standards to close the stand for this fixture.

Celtic supporters who have been allocated tickets in this stand will receive a full refund.  Celtic Football Club will manage the refund process and will communicate directly with those supporters affected. To this end, we thank all refunded supporters for their understanding and state clearly they should not travel to Tannadice for this game.

Celtic fans will still be housed in the West Stand or The Shed as it is better known with a scramble going on among fans to ensure that they have valid tickets.

Those fans lucky enough to have a ticket are likely to be watching a much changed Celtic side with Jota, Tony Ralston and Stephen Welsh injured during last night’s win over Hearts.

Cameron Carter-Vickers will return but with nine more matches before the winter break staring on January 2 Ange Postecoglou will hope that there are no more casualties on Sunday.