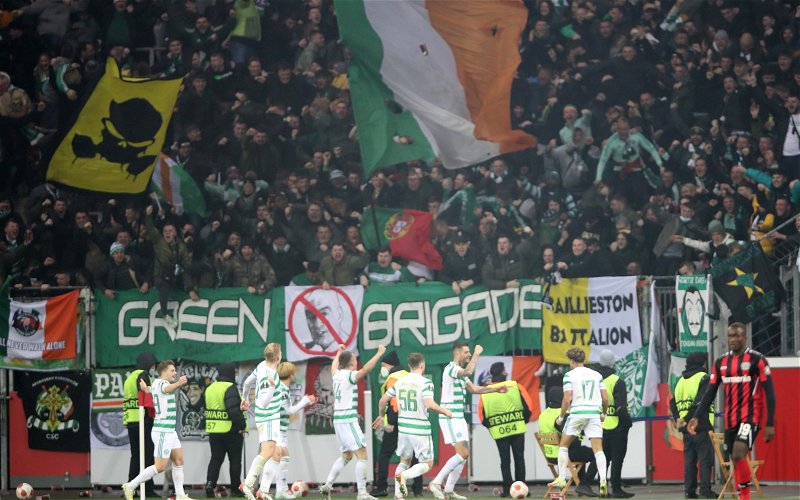 On the back of five successive away wins Ange Postecoglou is giving Celtic’s away support plenty of reasons to cheer.

It wasn’t until Livingston in mid-September that the new manager got to see his side in action in front of Celtic fans but filling three sides of the ground didn’t have the desired effect.

The performance at Tannadice on Sunday was everything that was missing in that defeat at Livi. Celtic were dominant and confident throughout, scoring two brilliant goals and looking well capable of hitting six or seven.

It made for highly enjoyable viewing with heart-on-sleeve boss Postecoglou enjoying the post-match acclaim for his side’s display:

Discussing the backing he is getting from the fans, the Celtic boss told the Daily Record:

I’ve said from day one, I’m not sure I’m sort of worthy of the adulation or the support I’m getting, because I’ve yet to achieve what I want to. But I can’t dismiss the fact they are right behind me, not just me, but the whole team.

The atmosphere they create, even on Sunday when a few unfortunately couldn’t get in to the ground. The ones who were there made up for it with their noise. They are the most important part of this football club.

You talk to anyone who was here last year, without the Celtic support and our fans in the stadium, there isn’t the same sort of meaning to this football club. It’s just about me showing my gratitude for their support.

Celtic have back-to-back home matches coming up against Real Betis and Motherwell before hitting the road with trips to Dingwall, Hampden, Paisley and Perth before returning home after Christmas to face Hibs on December 29.