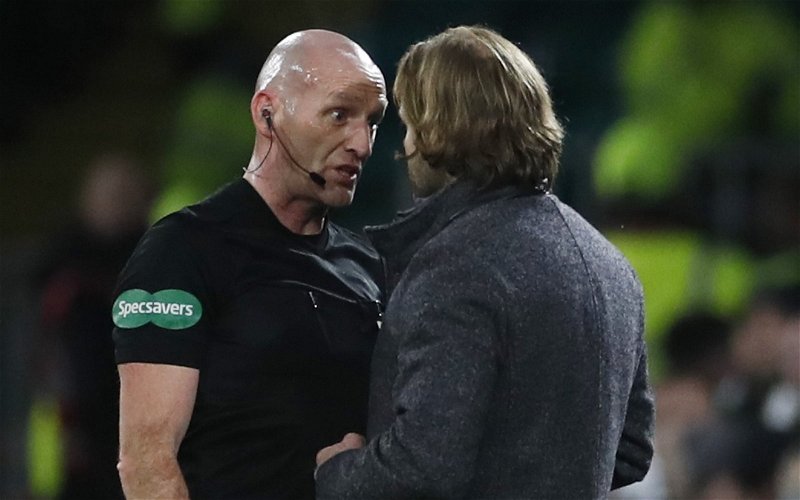 Dermot Gallagher and Stephen Warnock on Sky Sports News were both in agreement that Callum Butcher should have saw red at Tannadice for his attack on David Turnbull.

It seems that there isn’t a single pundit in agreement with Don Robertson’s decision that the Dundee United defender only deserved a yellow card for the eye-watering challenge.

Celtic fans have become well used to brutal attacks on their players, other than Alan Power of St Mirren in the 19th minute of a 6-0 defeat, for another attack on Turnbull, it seems that referees are reluctant to issue a straight red card.

Everyone debating the DU “penalty” (that wasn’t a pen cos starfelt was fouled in the build up) and no-one even mentioning how this wasn’t a foul. (Or the fact the ref didn’t stop play when Abada was down but stopped when a DU player had cramp) #celticfc pic.twitter.com/ERCjl7kzck

Dundee United don’t have a reputation for being a dirty team but their visit to Celtic Park in September produced a few incidents that Kevin Clancy didn’t seem interested in punishing.

Robertson was again the referee at Easter Road when Porteous went straight through on McGregor, Bobby Madden had the opening game of the season at Tynecastle with Nick Walsh in charge of the two St Johnstone games where Cameron Carter-Vickers and Stephen Welsh were on the receiving end.

It was so obviously calculated and intentional, he made the point to the ref that he (erroneously) believed CCV to have done the same to him….

This all rests at the feet of our club. Get a public statement out there. None of this behind closed doors pish. Show the support that you have a backbone.