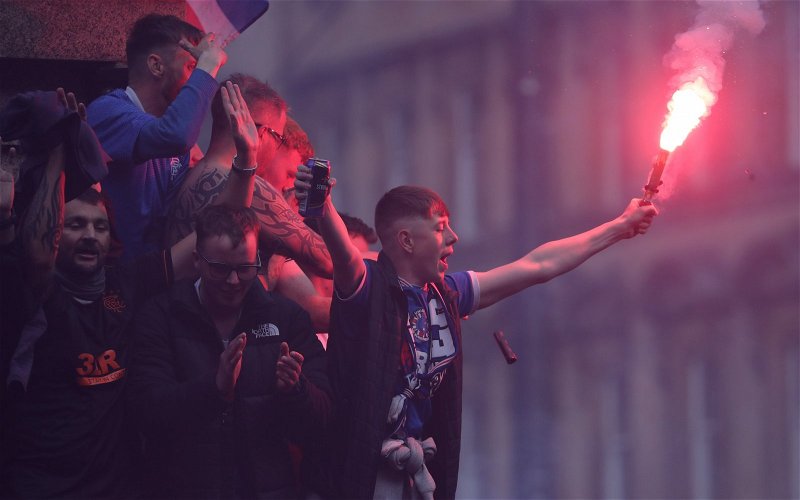 The French Interior Ministry has explained the decision to ban Sevco fans from Thursday’s Europa League tie at the Groupama Stadium.

Last week Lyon announced that 2,200 tickets would be made available to visiting supporters but the local authorities quickly announced that Billy, Gordon, Rossco, Stewarty and Crawford wouldn’t be allowed in the city centre on matchday to upset tourists in town for the Festival of Lights.

As most folk know Ibrox fans don’t tend to bother with local customs and regulations, in March and May they decided to riot and trash George Square while in Tier 4 of lockdown. Over 30 Police Officers had to self-isolate after the May riots. Less than 100 fans were identified and charged with little coverage of any punishments despite extensive CCTV coverage and social media videos.

With the local economy in need of an uplift with an influx of normal tourists Gerald Darmanin, the Minister of the Interior, decided to close the door on Ibrox fans bringing in their own poisonous customs to Lyon.

To justify this decision to ban Scottish supporters from coming to watch the match in Lyon, the text is based on the recent events which surrounded the trips of the Rangers to the European Cup, “frequently a source of public disorder in the main showing violent behavior of certain supporters or individuals availing themselves of the quality of supporter of this team “.

The decree is based on the fact that, despite the ban on the movement of Rangers supporters for the matches in Brondby and Prague during the last days, “they have repeatedly bypassed [these] prohibitions or [these] framing of shift”. The holding of the Festival of Lights, which is to take place from December 8 to 11 in Lyon, and which will mobilize many law enforcement agencies, also explains the publication of this ministerial decree.

The first leg between OL and Rangers, which took place on September 16 in Glasgow, is also cited in the text. That day, “an attempted brawl between supporters at risk was interrupted by the police and the official OL club bus was degraded”, it is written in the ministerial decree. All these reasons have therefore prompted the authorities to ban the travel of Scottish supporters to Lyon for this match of the 6th and last day of the Europa League.

It seems that announcing that they are unable to guarantee the safety of BT Sport pundits has alerted te French authorities to the issues caused by Ibrox fans on top of George Square I and II.

As well as losing out on travel and accommodation many Sevco fans had paid for PCR testing in both the UK and France for the trip. A few hundred are still expected to make the trip but most will be staying at home to watch the match on BT Sport with Chris Sutton.

Twice in 2019 UEFA closed sections of Ibrox due to racist chanting from Sevco fans.