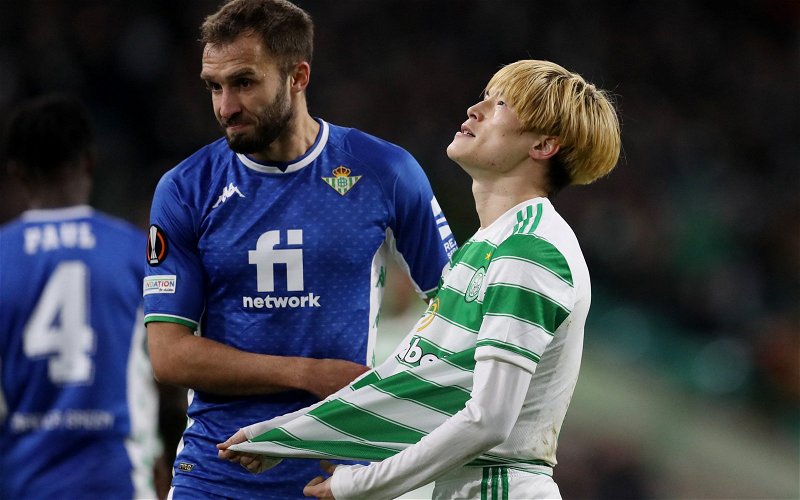 Celtic wrapped up their Europa League group campaign with a 3-2 win over Real Betis in what was supposed to be a dead rubber.

It could prove to be very costly however with two more hamstring injuries likely to deplete the squad ahead of a critical spell of matches.

When Albian Ajeti pulled up with a hamstring injury in the 28th minute it left Kyogo Furuhashi as the last striker standing with Giorgos Giakoumakis already missing.

Far more worrying for Ange Postecoglou was the sight of Kyogo pulling up in the 70th minute, after attention he came off to be replaced by Ewan Henderson who quickly put Celtic 2-1 ahead.

As Kyogo hobbled off attention on the match was diverted to medical news, last week Jota pulled up after 70 minutes against Hearts and looks unlikely to play again before the winter break on January 2.

After the match Postecoglou admitted that it didn’t look good for his Japanese striker. Going into a highly important run of matches it looks like Mikey Johnston or Liel Abada will be playing as striker with Kyogo joining Jota watching from the stand.

Can’t even feel happy about that win because I’m worried sick about kyogo ??

Only one thing we wanna know past-match. How is Kyogo?

That was class. Only sour note was Kyogo going off but apart from that, a few players done themselves no harm at all with a chance over the next few weeks.

Ange will need to accept that decision was utter stupidity bringing Kyogo on. Madness

Tell us Kyogo is ok …

Not a religious man, but praying that Kyogo isn’t properly injured

Right lets all pray that Kyogo is not seriously injured

Feel physically sick at the thought of Kyogo being oot injured