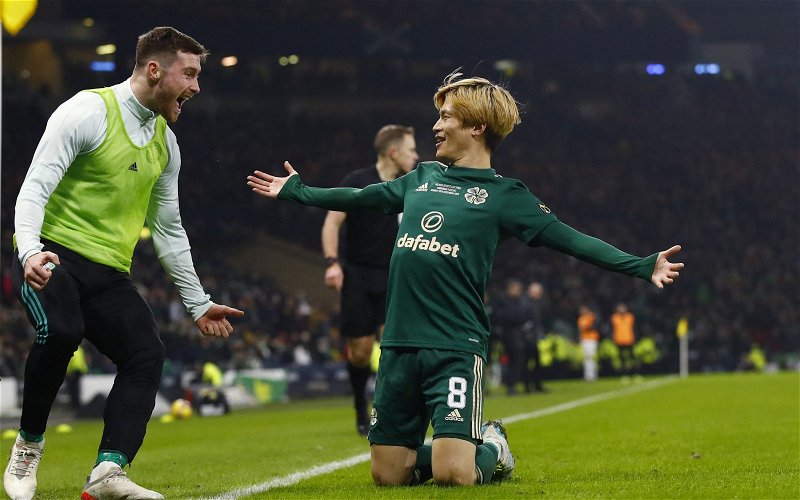 Kyogo Furuhashi is a major injury doubt for Monday’s SPFL clash against Hibs.

The striker suffered two hamstring injuries during January and hasn’t featured in any social media coverage of Ange Postecoglou’s squad training at Lennoxtown this week.

With 16 goals so far this season, including two against Hibs in the League Cup Final, the striker is the top goalscorer in Scotland and key to the system that Postecoglou has put in place at Celtic.

KYOGO FURUHASHI is a major injury doubt for Celtic’s Premiership restart against Hibs.  SunSport understands the Japanese star didn’t train with the rest of the Hoops squad at Lennoxtown.

Striker Kyogo, who suffered a recurrence of his hamstring problem against St Johnstone on Boxing Day, now faces a race to be ready for Monday’s Parkhead clash. Celtic’s top scorer also sat out the bounce game with St Mirren on Wednesday as he continues his rehab.

Giorgos Giakoumakis, Daizen Maeda and James Forrest can all play as a striker and have featured in training this week.

In Celtic’s last match on 2021 Kyogo pulled up after 15 minutes as he sprinted and stretched to reach a through ball from James McCarthy. That image will be in Celtic’s decision making process.

The original injury occurred when the striker replaced Albian Ajeti during the Europa League tie against Real Betis on December 9, after missing two matches he returned to start the League Cup Final against Hibs at Hampden.

After the Hibs match Celtic face Alloa on January 22, following that match Kyogo could be away on international duty for matches on January 27 and February 1.