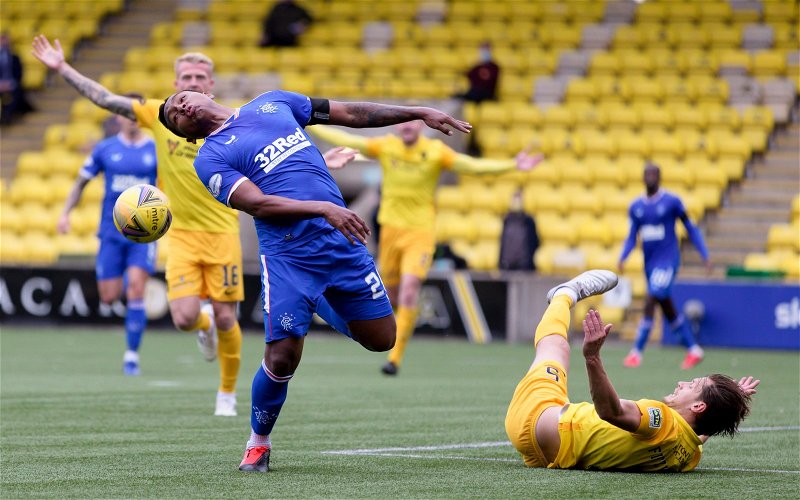 Steve Lomas believes that Jermain Defoe can finally open the door out of Ibrox for Alfredo Morelos.

After trying to split his time between picking up a wage at Ibrox and advancing his media career Defoe has come to an arrangement to end his Sevco contract with Cedric Itten recalled from his loan spell to offer Giovanni van Bronckhorst cover in the striking position.

Morelos is now in his ninth transfer window with the same clubs being reported as keeping tabs, showing interest and considering bids. No worthwhile bid has been put in for the chunky striker despite constant transfer noise from the Scottish and Colombian media.

Floating a new method of selling Morelos, the Daily Record turned to former St Johnstone and Millwall boss Steve Lomas for his thoughts:

Morelos is 25 now and the best thing he could do to extend his career is to look at what Jermain’s doing that keeps him playing at 39.

We’ve seen over the last few weeks that Morelos seems to have knuckled down a wee bit and got himself into better shape and maybe that’s behind his return to form.

It’s OK him being a big fish up in Scotland but if he wants to go to the next level and reach a stage like the Premier League then he needs to keep himself in top shape and there’s no-one better to take inspiration from on that front than Jermain.

I’m pretty sure there will be Premier League managers getting in touch with Jermain to ask about Morelos.

I’m pretty sure that after four and a half seasons in Scotland any English club interested in Morelos will already know all about the chunky Colombian. Morelos will be out of contract in May 2023.