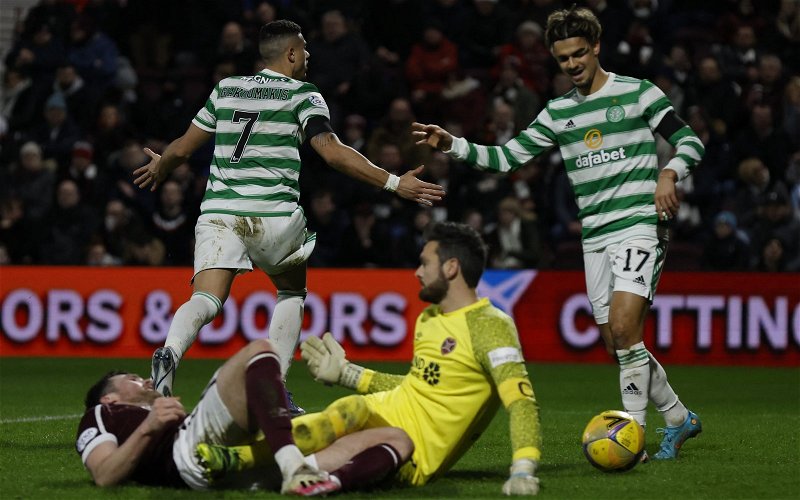 Without half a dozen regulars and forced to play Reo Hatate and Matt O’Riley, neither of whom had played a full match for the club, Celtic deservedly won 2-1 in a fixture that many were expecting them to drop points in.

Kyogo Furuhashi, Daizen Maeda and Albian Ajeti were all unavailable but Giakoumakis stepped in, played the striker role perfectly and delivered one brilliant moment of skill to score what proved the decisive goal.

Negotiations with VVV Venlo went to the final day of the summer transfer window with the striker having minimal impact in the first half of the season.

Presented with his opportunity Giakoumakis has scored twice in two games this year while turning in the sort of performances that other players in the team can feed off.

That’s what I mean about character and mentality. He [Giakoumakis] is another one who had a tough first half of the year for sure.

He worked hard to get himself fit during the little break we had. We gave the guys a few days off, but he kept going along with James [Forrest] and Chris Jullien to be ready and I thought he was great.

He scored not just a great goal, but worked awfully hard and he had to because unfortunately at the moment we don’t have somebody to give him a bit of a breather towards the end of the game.

He is showing people why I brought him. He has a presence about him and in the box he can score goals. That’s his strength.

It’s a testament to his character. I said after he missed the penalty against Livingston that that’s the burden you carry being the No.9 here at Celtic. You are expected to be here for the big moments and score goals and that’s what he wants.

He didn’t shy away after that happened, worked hard to get himself fit and be ready. I’m very proud of the players, we had a bit of a challenge, it’s not an easy place.

Giakoumakis can now look forward to two home matches and the opportunity to further bed himself into the Celtic side with the chance to eat into the four point gap at the top of the table.