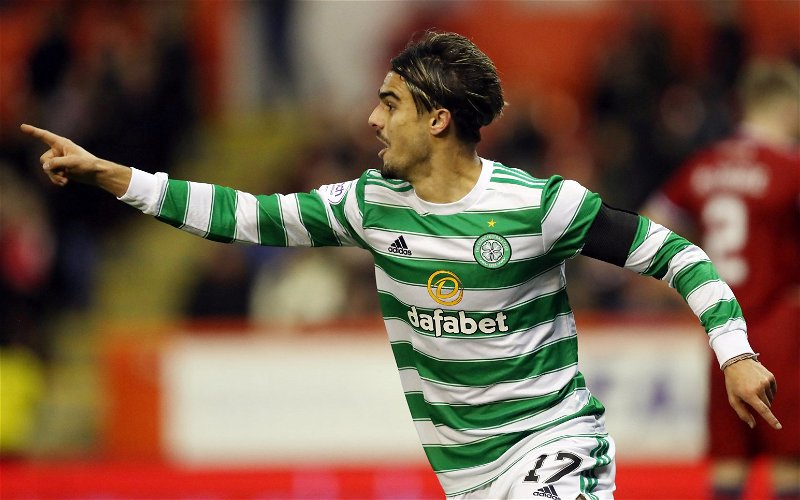 Michael Stewart has highlighted the first half ‘goal’ from Jota at Aberdeen last night which seems to have been overlooked in most of the post match analysis.

Taking their lead from the howls of the Aberdeen players Celtic’s third goal has been thoroughly examined to try and find a reason to disallow it, either for offside or an obstruction on David Bates.

Both arguments have limited merit whereas the first Aberdeen goal seems to be escaping scrutiny. After Mattie Kennedy had fired a shot wide of the post Willie Collum decided to take play back for a free kick at the side of the penalty box.

When the ball was delivered Scott Brown held Carl Starfelt back from attempting to block Christian Ramirez’s shot. Collum never noticed the infringement and it was game on.

You’ve got to say credit to Celtic for getting themselves back in front but there is a huge element of controversy. I do think Liel Abada is in an offside position and he affects the game.

Celtic let themselves down and let Aberdeen into the game. If you look right across the line here, you can see Abada is offside.

When the ball comes back into the box, he blocks David Bates from getting back to challenge Jota. I do think if Abada isn’t there then Bates would have been able to challenge and maybe flick the ball away. It’s good play from Celtic to react so quickly but I don’t think the goal should have stood.

There was one in the first half though when Jota was flagged offside when he went and knocked the ball past the goalkeeper.  I think he was probably onside in that one so perhaps they have balanced themselves out in that game but you can understand why Aberdeen were raging at that moment.

With Celtic leading 2-0 Jota ran in behind the Dons defence with the flag going up as he prepared to face Gary Woods. The Dons keeper switched off when he saw the offside flag as Jota put the ball in the net, that incident seems to have avoided the level of scrutiny given to Celtic’s third goal.