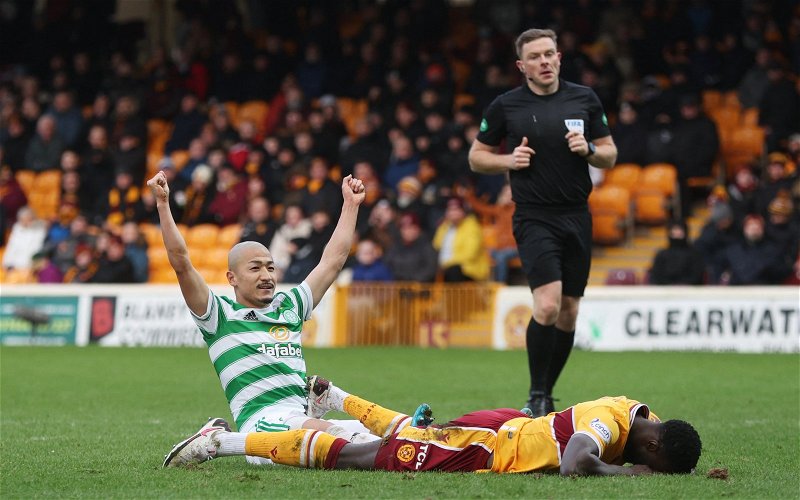 Even while enjoying an emphatic 4-0 win at the side fourth in the Premiership table Celtic fans had plenty to say about the performance of John Beaton.

The Lanarkshire based referee had a short journey to Fir Park but seemed reluctant to apply the laws of the game fairly to both teams.

Giorgos Giakoumakis was regularly man-handled with next to no protection from the referee, in one first half incident Bevis Mugabe had both hands grabbing the striker’s shirt with a free-kick awarded to Motherwell and Giakoumakis spoken to by the referee.

The main incident of contention occurred shortly before half-time when Liel Abada sent a close range overhead kick into the net from an offside position.

Disallowing the goal was the correct decision but before Abada struck the ball Jake Carroll had raised his arm to prevent a Tom Rogic shot from finding the net. No penalty was awarded.

The handball had occurred a second or two before Abada netted, for some reason the match referee and his assistant both failed to notice it.

In a match in which Celtic had 70% possession each side had a player booked in the first 80 minutes, in the last 10 Mugabi and Liam Donnelly were booked from the home side.

A special mention for John Beaton today.
I hope that hurt , one of the poorest “officials ” in our game .
Some of the fouls he awarded and bookings and non bookings that occurred during the game was beyond belief.

Even just the basics are difficult for them .

Celtic were impressive today good movement, quality pressing and decent finishing though the fourth is an og. Maeda looks like a really good player. The refereeing was poor again with John Beaton being inconsistent in his decision making and when handing out bookings.

By giving Celtic a free kick instead of playing the advantage he is helping the other team.@ScotlandSky #Celtic

He was a disgrace

Free reign on our players all season. Rogic gets fouled all day long.

Decisions against GG were shocking

Seen McGregor wasn’t happy with him on a few occasions..