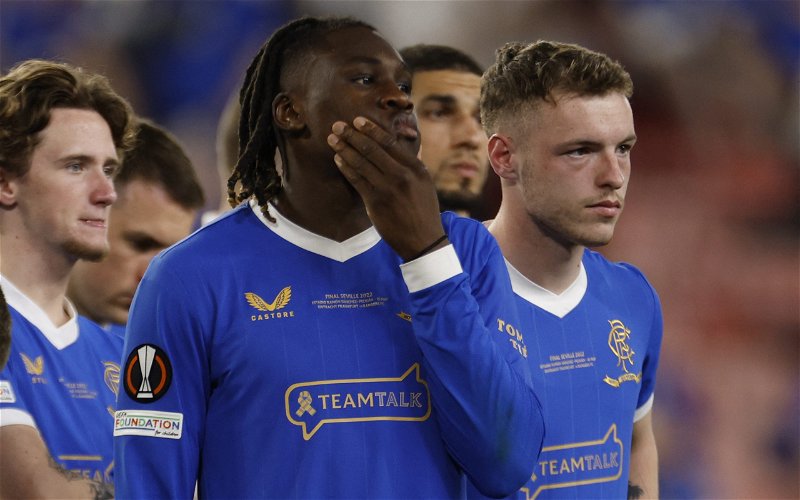 THE cinch Premiership triumph that Rangers romped to in such fine style last season was viewed by many of their longsuffering followers as the end of years of struggle and the dawn of a glorious new era.

In keeping with the tone of the article in the Evening Times, Matthew Lindsay’s introduction is factually wrong. No company sponsored the 20/21 SPFL, cinch came in during last summer for the 21/22 season.

The Glasgow giants posted losses of £23.5m. The league may well have been won. However, at what price had their success come?

Supporters of their opponents lapped it up. For them, it was evidence that Rangers had not learned any lessons from the past and were hurtling headfirst towards oblivion once again.

Steven Gerrard had only brought in John Lundstram, Nnamdi Ofoborh and Fashion Sakala, three free sigings, as well as Juninho Bacuna, who cost a nominal fee, during the summer. There were widespread suspicions that trouble was afoot.

That playing all of their matches behind closed doors because of the pandemic had cost the new champions millions in matchday income was conveniently ignored. As was the fact that prized assets who would have been sold in normal circumstances had been retained in a concerted effort to win the Premiership.

Still, those voicing concerns definitely had a point. Lifting silverware in Scotland and performing well in Europe was all well and good for Rangers. But doing so while balancing the books had to be their ultimate ambition.

Living outwith their means, spending money which they did not have, acting with shameful recklessness at boardroom level, was what had led to their well-documented implosion in 2012 and subsequent seasons of hardship in the first place.

Yet, selling Bassey makes sound business sense for Rangers. They will not entertain any bids under £25m for an individual they landed for a paltry £230,000 from Leicester City back in 2020. They will, then, make tens of millions of pounds profit on the young player they have received two years great service out of.

Could an Auchenhowie graduate even spring to prominence? Van Bronckhorst, who came through the renowned Dutch youth system as a kid, has shown he is willing to give youngsters a chance. Adam Devine, Leon King, Alex Lowry, Charlie McCann and Cole McKinnon have all received game time. Great things are certainly expected.

Tears will be shed down Govan way when Calvin Bassey moves on, but if his sale allows Rangers to post a profit it will, as much as the Scottish title win or appearance in the Europa League final, be a clear indication their revival is complete.

In January 2018 the Evening Times broke the news of a £10m bid for Alfredo Morelos from China. Nine transfer windows later the chunky Colombian is still at Ibrox.