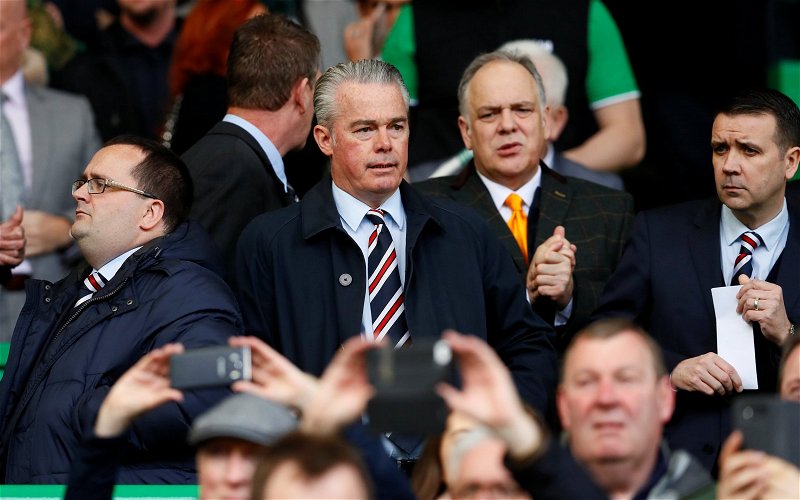 Paul Murray seems to have missed the memo about the record sums of money pouring into Ibrox.

According to Stewart Robertson the 17m euros from reaching the Europa League Final replaced the money lost that night Jon Dahl Tomasson took Malmo to Ibrox.

With Castore pumping out new kits on a monthly basis, the 10th Anniversary bonanza and commercial deals with firms such as Sportemongo, Giovanni van Bronckhorst should have a substantial war-chest to spend this summer.

A decade ago Murray watched Sur Dave send the old club to an early grave through a scam of disguised remuneration, in 2015 he joined forces with Dave King at the Tribute Act but stepped aside when the directors were asked to put their own money in.

Yesterday the Press Association turned to the Borders Banker for a fresh take on Calvin Ramsey’s soaring transfer value.

Picking up on that, the Daily Record reports Murray saying:

Recruitment in football now is absolutely critical and if we get the recruitment right in the summer, we have every chance of winning the league next year.

I would be pretty confident. I think we should be looking at trading in some players and freshening up the squad. Any team needs to be freshened up and whether that is Calvin Bassey or anyone else, every player has a price.

Bassey has been immense in terms of his end to his season, his whole season. It depends on how the manager sees the team and the shape of the team.

So yes, a lot of decisions to be made but the good thing is we have assets to look at. It is all pretty positive as far as I am concerned.