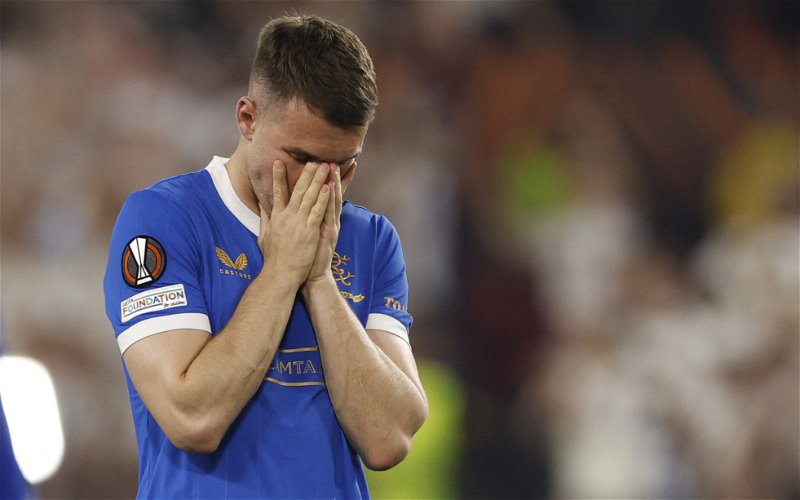 Six days after losing the Europa League Final in Seville Ibrox fans got the result that they wanted- a statement.

On Thursday morning rather than look at the chronic defending of Connor Goldson, Ryan Kent’s deplorable scoring record or the feeble penalty taken by Aaron Ramsey the thirsty bears had a bigger priority to deal with- WATERGATE.

Responding to a call from Derek Clark on Rangers Review fans swamped his Twitter account with tales or dehydration.

After having water bottles and battery packs removed the Elderly & Disabled Loyal discovered that there was barely a refreshment kiosk available to fans of Giovanni van Bronckhorst’s team.

Tear-jerking stories emerged of fans spending time slurping water from the toilets to stay alive although strangely video footage seems to be thin on the ground.

One fan revealed how they requested a soft drink or water for their elderly father to take with medication only to be offered a hotdog. Unconfirmed reports claim that stewards only spoke Spanish which seems to have pushed the Ibrox club into issuing this Statement:

Our fans went to Seville and wowed locals with colour, noise and positivity and showed the true character of Rangers. Although the result did not go our way, we will remember the build up to the match with great fondness.

However, we have major concerns around the treatment of our supporters at the Ramon Sanchez Pizjuan Stadium, including the confiscation of previously approved and agreed items that were confiscated by the police and a lack of appropriate facilities within the stadium including the lack of bottled water or indeed water in the toilets which understandably caused severe distress to many supporters in the stadium.

Rangers FC are in dialogue with both UEFA and Football Supporters Europe (FSE) regarding the issues encountered by our supporters.

Supporters wishing to make a complaint to UEFA should be aware that UEFA has no direct grievance procedures for supporters.  We would recommend that supporters contact FSE via their away supporter’s survey which can be accessed HERE.

FSE are an independent, non-profit association of fans recognised as a representative body on fan issues by UEFA and are submitting a full report on the experiences of supporters in Seville.

Additionally, any supporters who have not yet shared their experience with the club and wish to do so, please email slo@rangers.co.uk by Thursday 26th May, of which a summary will be shared with UEFA.

Thank you for your continued support.

Whether that statement will be enough to get the match replayed remains to be seen.