Grant Russell has called out the inadequacies of the proposed Sky Sports deal with the SPFL.

Less than halfway through a five year contract it seems premature of Neil Doncaster to be locking the SPFL into an additional four years with a broadcaster that treats Scottish football as a last resort in terms of budget, scheduling and promoting.

After blanking Celtic’s trip to Ross County last weekend the match against Kilmarnock on Sunday will kick-off at 12 noon before attention switches to the main menu- a bland diet of EPL clashes hyped beyond belief. 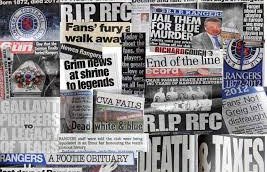 The haste to set up a new deal could be related to an independent Deloitte Report which is believed to be targeting a £50m/year broadcasting deal.

In December 2021 Aberdeen chairman Dave Cormack told BBC Scotland: “We believe we can get to £50m in the next five-to-10 years. We believe there’s an immediate 20-30 per cent increase and we’re working on that with Deloitte.”

With Neil Doncaster in charge the SPFL are ready to give away 25% more matches, rising from 48 to 60, for a fraction more money leading to a significant reduction in payment per game.

The fact that the CEO of the SPFL is even discussing such a ‘deal’ says everything about his negotiating skills and low regard for Scottish football.

In 2012 Doncaster drafted the Five Way Agreement between two clubs from Ibrox, at the same time the SPL CEO was negotiating a new Sky Sports deal assisted by Peter Lawwell.

Sixty will be shown, 60 more will be gifted back to the clubs, 108 will be imprisoned.

It’s not enough. Make all the non-Sky games available for clubs to sell. https://t.co/fiasl6DIoI pic.twitter.com/YUbSG5wDOw

CLICK HERE for Russell’s LinkedIn profile, he has previously worked for STV and Motherwell, currently he is Marketing Lead at West Ham.