Not on my radar- Ange kills of striker claim

Ange Postecoglou has killed off any suggestion that Celtic are interested in signing Bamba Dieng.

Barely 48 hours goes by without Celtic being linked with someone, most of the time it seems that the hoops are added to a list of three or four clubs to give a story credibility.

Dieng seems close to joining Fulham for a fee expected to be over £10m with that sort of deal way above Celtic’s boundaries. 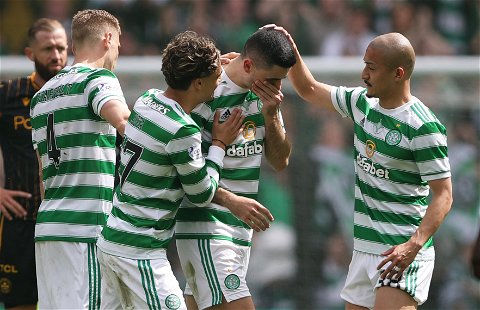 Keeping Kyogo Furuhashi and Giorgos Giakoumakis happy with game time could be a major issue for Postecoglou over the next couple of months, introducing another big money striker isn’t a priority in the remaining 18 days of the transfer window.

Some reports this week have linked you with a move for Alex Collado from Barcelona and Bamba Dieng of Marseille. I was just wondering if those are players on your radar and since they are both strikers, is the striking position one that you want to strengthen?

Neither are on my radar, and as I said before, we will stay active in the market over the next couple of weeks while the transfer window is still open. There is still the possibility of moving a few guys on, and then from our perspective, it is about finding the right fit for what we need at the moment. We’ll stay active in case the right target becomes available, but at the moment, we are talking to no one, and there is no one on the horizon.

After spending £6m on Jota and the same figure on Cameron Carter-Vickers it seems unlikely that there will be any more transfers with figures in that region.

With seven signings made over the summer Postecoglou has two players for every position in the team, any late addition knows that they are coming in as part of a squad rather than into the Starting XI.