Matt O’Riley is looking forward to speculation about his exit closing alongside the transfer window at midnight tomorrow.

Manchester United, Arsenal, Liverpool and Borussia Dortmund have been credited with an interest in the midfielder who only joined Celtic in January from MK Dons.

Since moving north virtually everything has gone his way with Champions League football next week perhaps opening the door to a place in the Danish World Cup squad. 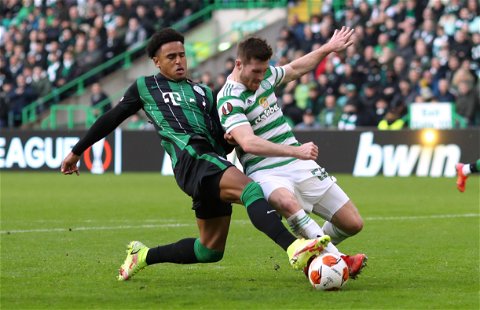 O’Riley has a very clear career path mapped out, that is why he left Fulham for League One, but another switch this year isn’t part on his mind as he told the Daily Record:

Everyone involved in football, transfer times are a really awkward time. The fans are really excited. For the players and staff and the club, it can be stressful. Especially for players who are maybe trying to get a move, they are itching and stuff like that. I’m in the position right now where it is quite chilled for me. I’m not really thinking about much. I love my football here, so that makes it quite easy for me.

It’s obviously nice. It shows I am doing good things, it shows I am playing in a team which is competing at a high level. But, like I said, I don’t think about any of that stuff at all. Right now, I’m enjoying my football here, I’m loving it.

Had there been a likelihood of O’Riley leaving it is highly unlikely that he would have been put up to speak to the media.

Celtic wisely signed the midfielder onto a five year contract but at his current rate of development it is unlikely that he will be with Celtic for the duration of that deal.

Next summer could be an awkward time for Celtic in terms of interest from other clubs but so far Ange Postecoglou appears to have a perfect grasp of the transfer market with a strong squad of 22-25 first team players build up over three windows.