Frustration for Celtic midfielder despite the plaudits 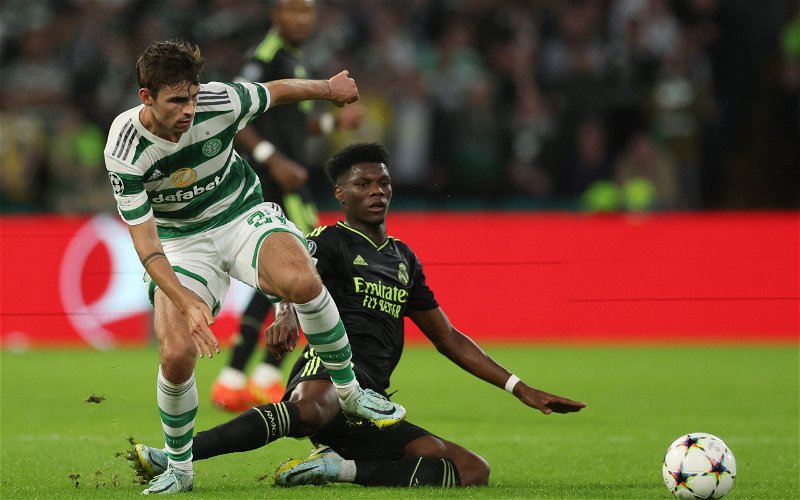 Matt O’Riley admits that he felt frustrated being on the end of a 3-0 defeat from Real Madrid on Tuesday night.

A year ago the Spanish side were setting off on a campaign that saw them lift the trophy by beating Liverpool in Paris, 12 months ago O’Riley was helping MK Dons to a 1-1 draw away to Cheltenham in League One.

The midfielder is now being noticed by the biggest clubs in the EPL but his focus is fully on Celtic and his own personal development.

Playing against Luka Modric and Toni Kroos wasn’t a consideration for O’Riley a year ago but he now has four more top class fixtures to prepare for a re-match in the ultimate football Cathedral, the Santiago Bernabeu Stadium in the Spanish capital.

Reflecting on Tuesday’s match the midfielder told the Daily Record:

When I came off I reflected on some of their players. I thought Modric was very good. For a guy at 37 to still be that good is impressive. It’s obviously nice to share a pitch with someone like that.

And to be honest just to test yourself against that kind of opposition is what it’s all about. I felt we did for a large part of the game, that’s I feel so frustrated with the outcome.

O’Riley and his team-mates face Livingston on Saturday but the big target is Shakhtar Donetsk on Wednesday and the chance to get off the mark in the Champions League.