Chris Jack of the Herald/Times has claimed that Celtic were handed the 2019/20 title by the SPFL!

With the country forced into lockdown in March, football was suspended with Celtic 13 points clear of their city rivals with eight matches left to play. Steven Gerrard’s side had an extra fixture to play with the break coming while they were on a run of losing four out of their last five matches.

After examining all possibilities the SPFL put out a vote to decide all four divisions based on average points per game. The vote was carried. 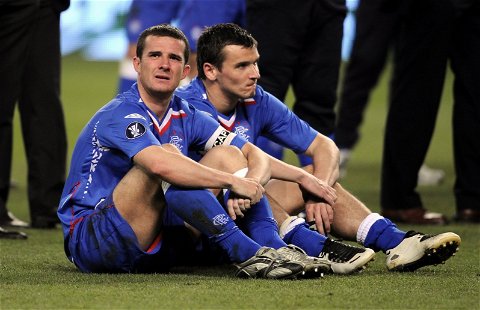 Barry Ferguson questions the drive and motivation of Ibrox squad

Rounding up a number of ‘crimes’ he explains to readers of the Glasgow Times:

Rangers are no fans of Doncaster. In the eyes of their fans, he is out of his depth, a puppet rather than a master that has overseen some of the most controversial periods in the history of our game and that lacks the drive and innovation to take Scottish football forward.

The fall-out from 2012 will never be forgotten or forgiven and events of the Covid title handed to Celtic continue to leave a sour taste. The relationship between club and League is broken and there is a lack of trust and faith from Rangers supporters towards those who are supposed to represent their best interests nationally.

Had the club paid Her Majesty instead of retaining money apparently deducted for Income Tax and National Insurance they would have avoided administration. If they had offered an acceptable CVA they’d have avoided liquidation.

With the Five Way Agreement of 2012 put together by Doncaster the CEO of the SPFL is one of the biggest backers of the stream of lies that come out of Ibrox to fuel the paranoia of their supporters.