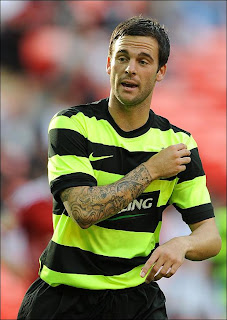 Defender Danny Fox is out of today’s clash with Rangers after picking up a hamstring injury in training yesterday.

The former Coventry defender has played in every SPL match this season but will be missing at Ibrox.
Fox’s absence opens the door for Mark Wilson who is likely to switch to left-back with fit again Andreas Hinkel playing at right-back.
The loss of Fox will be a big blow for Tony Mowbray who goes into his first Rangers-Celtic match as manager without his other major signing Mark-Antoine Fortune.
Mowbray could pick a team without any of his summer additions if he decides to go with the experience of Barry Robson ahead of Landry N’Guemo in central midfield.
Rangers have their share of injury concerns with Lee McCulloch, Madjid Bougherra and Kevin Thompson all struggling with the effects of flu.
POUNDING
The quality of both side’s has taken a pounding in recent weeks with the injury news from both camps further reducing the quality of play on offer.
Normally the first Old Firm game of the season is seen as the litmus test for the clubs summer signings, today there is likely to be just two players, Jerome Rothen and N’Guemo, in line for a debut.
Celtic can of course call upon Niall McGinn and Paddy McCourt but both players are likely to start the match on the bench.
UJPEST
Elsewhere in the world of Celtic it was former reserve boss Willie McStay that stole the weekend honours steering Ujpest Dozsa to a 2-1 derby win over Ferencvaros.
Peter Rajci was the Ujpest hero with the winner in the 87th minute after captain Peter Kabat had cancelled out a 40th minute opener from Fitos.
There was mixed fortunes for the loan Celts with Ben Hutchison scoring his first Swindon goal in the 3-2 win at Brentford with Simon Ferry also involved.
Cillian Sheridan was an injury time substitute in Plymouth’s win over Scunthorpe while Darren O’Dea was on the losing side as Reading’s miserable home form continued with a 2-0 defeat from Middlesboro at the Madejski Stadium.
CONTRASTING
In management there was some wildly contrasting fortunes, Mick McCarthy, Malky Mackay and Roy Keane were on the end of defeats with Wolves, Watford and Ipswich in the top two divisions.
Down towards the bottom of the Football League Chris Sutton made a winning start guiding Lincoln to a 1-0 win over Aldershot with Torres, Sergio not Fernando, scoring the 83rd minute.
Paul Lambert enjoyed a great 5-1 win as Norwich beat third placed Bristol Rovers to move into seventh place in League One.
Give us feedback